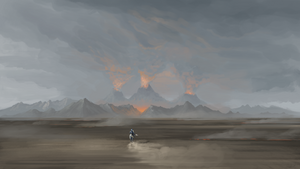 Thangorodrim was said to have been the piles of slag from Morgoth's furnaces and rubble from the delving of Angband[2], though they were solid enough to form sheer precipices; Maedhros was chained to a cliff of Thangorodrim[3], and Húrin imprisoned on a high terrace[4]. The tops of Thangorodrim perpetually smoked, and sometimes spewed forth lava. The three peaks of Thangorodrim functioned as furnaces for Morgoth's great smithies deep in Angband.

For a time the Eagles lived on Thangorodrim, but at some time during the First Age they removed to the Crissaegrim near Gondolin.

At the base of the south face of the middle peak was the Great Gates of Angband, a deep canyon leading into the mountain, lined with towers and forts. There were also a number of secret gates scattered around the sides of the mountain group, from which Morgoth's hosts could issue forth and surprise their foes.

Thangorodrim was destroyed in the War of Wrath at the end of the First Age when the defeated dragon Ancalagon the Black fell on them.[5]

The position and size of Thangorodrim are unclear. One drawing by Tolkien, if to scale, would have made Thangorodrim 35,000 ft high, and the statement that it lay 150 leagues (450 Númenórean miles) north of Menegroth puts it too far away for some of the action in The Silmarillion to make sense; a distance of 150-200 miles would have been more consistent. It is possible that with the higher figure Tolkien was not referring to 'as the eagle flies', but rather 'as the wolf runs': the plateau of Dorthonion forced a long detour which added the extra 200, 250 miles to the distance.[6]

Thangorodrim is Sindarin for "Mountains of Tyranny"[7] or "mountain-chain of tyranny".[8] The name consists of thang ("compulsion, oppression") + orodrim ("mountain-chain").[7][9]

In earlier Noldorin, Thangorodrim is glossed as "Mountains of Duress".[10]

The "Remains of Thangorodrim" is an Under-deeps site (conceived as having been drowned in the ocean during the War of Wrath, but surviving as ruins). It cannot be reached from the surface, only through the adjacent site the Drowning-deeps.