Ancalagon the Black was the greatest of Morgoth's Dragons, and the mightiest winged fire-dragon that ever existed.

During the War of Wrath, the Valar waged their final war on Morgoth. Their victory was at hand, with most of the Dark Lord's Balrogs and other troops destroyed.[1] But in the year 587,[2] Morgoth unleashed the winged dragons, which he had been hiding in Angband. Ancalagon was among them, and their attack drove back the forces of the Host of the Valar, as they came with thunderbolts and fire storms.[1] 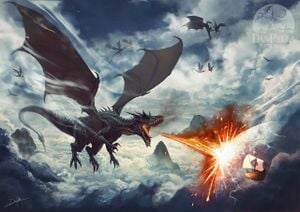 "Ancalagon vs Earendil" by Daniel Pilla

But Eärendil came, shining with white flame, and about Vingilot were gathered all the great birds of heaven and Thorondor was their captain, and there was battle in the air all the day and through a dark night of doubt. Before the rising of the sun Eärendil slew Ancalagon the Black, the mightiest of the dragon-host, and cast him from the sky; and he fell upon the towers of Thangorodrim, and they were broken in his ruin.
—Quenta Silmarillion, "Of the Voyage of Eärendil and the War of Wrath"

By the late Third Age, Gandalf mentioned Ancalagon, noting that not even his fire could harm the One Ring.[3]

Ancalagon is a Sindarin name. It is not properly glossed, but it contains anc ("jaws") + root alak- ("rushing").[4]

In the Noldorin phase of the Elvish language it is glossed as "Biting-storm", from anc ("jaw, row of teeth") + alagos ("storm of wind").[5]

The only mention of Ancalagon in later texts is in a note about the language of the Haladin, written in Tolkien's last years:

The language of the Folk of Haleth was not used, for they had perished and would not rise again. Nor would their tongue be heard again, unless the prophecy of Andreth the Wise-woman should prove true, that Túrin in the Last Battle should return from the Dead, and before he left the Circles of the World for ever should challege the Great Dragon of Morgoth, Ancalagon the Black, and deal him the death-stroke.[11]

Christopher Tolkien explains that this prophecy is in line with the different versions of the End of the World prophecies, as his father always used the term "Last Battle" to the apocalyptic event. However, he also notes that in the specific essay from which this quote is excerpted, the term "Last Battle" is clearly used to describe the battle at the end of the Elder Days, despite that in all previous texts it was Eärendil who destroys Ancalagon in the War of Wrath.[11]

Christopher explains that Túrin slaying Ancalagon in Andreth's prophecy resembles Sigurd killing Miðgarðsormr in the Völuspá, especially in the retelling his father made in the New Lay of the Völsungs.[12]

Two animals are named after Ancalagon: Ancalagon, a Cambrian priapulid by Simon Conway Morris in 1977, and Ankalagon by Leigh Van Valen in 1980, a Paleocene mesonychid mammal.[13]