Scatha the Worm was a mighty Long-worm of the Grey Mountains and one of the greatest Dragons to infest that range of the north.

Little is known of Scatha's life, except that he possessed a great hoard, stolen from the Dwarves. He was slain by Fram son of Frumgar in the early days of the Éothéod.

His recovered hoard was the subject of great dispute between the Men of the Éothéod and the Dwarves of that region, who claimed the hoard as their own. Fram rebuked their claim, and sent them the teeth of the dragon, with the words, "Jewels such as these you will not match in your treasuries, for they are hard to come by." It was rumored that for this insult the Dwarves killed him. [2]

It seems like Fram's people retained at least some of the hoard, and Eorl brought it south when they settled in Rohan. The Horn of the Mark that Éowyn gave to Merry Brandybuck after the War of the Ring many hundred of years later was said to come from Scatha's hoard.[3]

Scatha, which represents a name in the language of the Éothéod, is a modernization of Old English sceaða, meaning "injurer, enemy, robber".[4] It is related to modern English "to scathe".[5] 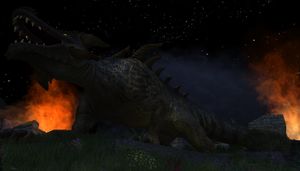 Scatha in The Lord of the Rings Online

Scatha appear in a flashback narrating the history of Fram and the Éothéod. He attacked Framsburg and mauled Frumgar's sword-arm, after which Fram swore revenge and hunted Scatha for two years. In the present day, the player locates the remainder of Scatha's hoard, which Fram was unable to bring with him.