During his rule the Éothéod lived in the land between the Misty Mountains on the west, the Forest River in the east, the confluence of the rivers Greylin and Langwell in the south[3] and the Grey Mountains in the north and were troubled by the Dragon Scatha. Fram slew the monster and claimed the Dragon's hoard as his own. The Dwarves of that region also laid claim to the treasure, but Fram rebuked the claim, instead sending them the teeth of the Dragon along with the message, "Jewels such as these you will not match in your treasuries, for they are hard to come by." The rebuke angered the Dwarves, and it was rumoured that they killed Fram for it.[1]

The only fortified burg of the Éothéod was located at the confluence of the Greylin and the Langwell.[4] It is possible that this burg was the settlement known as Framsburg[5][6] and that it was named after Fram.[7] 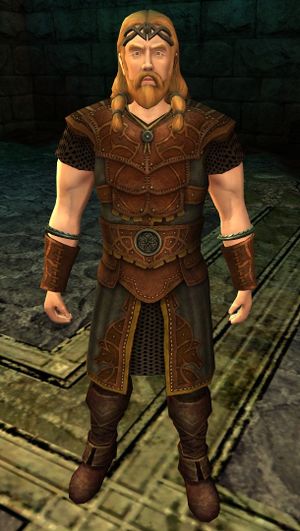 Fram in The Lord of the Rings Online

Fram appear in a series of flashbacks narrating the history of Éothéod. When Scatha attacked Framsburg, Frumgar lost the use of his sword-arm, after which Fram swore revenge and hunted Scatha alone for two years. Frumgar died shortly after Fram returned with Scatha's treasure, while Fram himself was not killed by Dwarves, but by the servants of the Enemy who made it look like Dwarves were involved to sow dissent in the North. Fram left three sons, Gifica, Gundamári and Gisilhári. None of them were at age at the time of Fram's death and the two eldest died in battles against Orcs.