Framsburg[note 1] was the only fortified burg of the Éothéod, the ancestors of the Rohirrim, while they lived in the far north by the Grey Mountains between the rivers Greylin and Langwell.[2]

Framsburg was probably founded shortly after the Éothéod arrived in T.A. 1977,[1] during the rule of Frumgar, but it took its name from his son Fram, the famed slayer of the Dragon Scatha.[3]

The burg was probably abandoned circa T.A. 2510 when Eorl the Young led the Éothéod south to settle Calenardhon, the land later known as Rohan.[1] 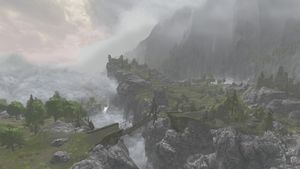 Framsburg in The Lord of the Rings Online

The ruins of Framsburg can be visited and explored in the "Wells of Langflood" region.