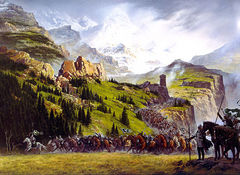 The Riders of Rohan by Ted Nasmith

Calenardhon was a wide green landscape in the north of Gondor.

It was devastated or deserted by the Great Plague and during the Watchful Peace the Númenórean garrisons of the forts were not renewed, and local chieftains (whose subjects were increasingly of mixed blood) gained more control. The Dunlendings decided to repopulate it.[1]

During the rule of the Steward Cirion, Gondor faced a series of attacks by the Balchoth, and Calenardhon was overrun by these evil people. Cirion sent messages for help to Gondor's old allies, including the Éothéod, to help defend Gondor.

Eorl the Young answered the call, and helped Gondor defeat the Balchoth at the Field of Celebrant. In gratitude, Cirion granted all Calenardhon to the Éothéod.

After the Éothéod settled in Calenardhon, the land became known as Rohan or the Riddermark.