The Hornburg (originally Aglarond and then Súthburg) was a great Gondorian fortress later used by the Rohirrim.

It was said among the Rohirrim that "no enemy has yet taken the Hornburg", and it was considered the strongest point in Rohan, stronger than Edoras and Dunharrow.

The fortress was built in the western Calenardhon on a rock that was connected to the Deeping Wall. It guarded a deep valley nestled in the northeastern White Mountains below the Thrihyrne.[1]

The fortress was built by Gondorians in the days of the glory of the kings of Gondor[1] and was originally called Aglarond.[2][3]

In later years whole regions of Gondor, such as Calenardhon, were depopulated or evacuated. After being repaired with help of masons of Gondor, it came into the possession of Rohan and the master of Westfold dwelt there. The Rohirrim called the fortress Súthburg.[4] This name was probably used due to it being the southern of the fortresses that guarded the Gap of Rohan and the Fords of Isen, Isengard being the other.

During the Dunlendings' occupation and Wulf's usurpation, Helm Hammerhand sought refuge there during the Long Winter in T.A. 2759. It was renamed Hornburg after the days of King Helm,[4] because a horn sounded from its tower could be heard in the whole Deep.[1]

During the War of the Ring it was commanded by Gamling the Old, and defended off a large-scale attack from Isengard during the Battle of the Hornburg. 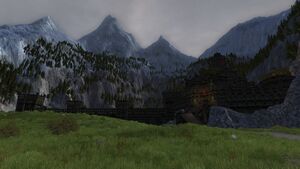 Hornburg in The Lord of the Rings Online

Hornburg was added with the Helm's Deep expansion in 2013. The "main" version is set chronologically shortly before the Battle of the Hornburg, but players also have access to a different-looking version set in the aftermath of the battle.