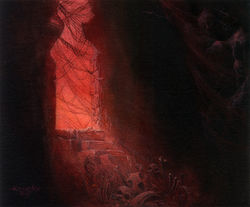 Shelob's Lair, also known as Torech Ungol, was the complex of tunnels wherein the monstrous spider Shelob resided. It was before the top on the west side of the pass of Cirith Ungol in the Ephel Dúath mountains guarding Mordor.[1]

Before the top of the pass of Cirith Ungol on the west side was a great grey wall, and in the shadows at its base was a cave opening. This was the entrance to the tunnel of Shelob's Lair, out of which came a foul reek. Within the air was still, stagnant, and heavy, and sound was deadened. Going eastwards, the walls and floor were smooth, with only occasional steps. The tunnel was high and wide, such that two hobbits walking abreast and touching the side-walls with outstretched hands could not reach each other.

After some distance from the west entrance, there was an opening on the right. Soon there were more openings on either side of varying sizes, although the main path continued in a straight line. It was in this region that the first bits of webbing could be detected, hanging from the ceiling. Eventually on the left was a very wide passage from whence issued the worst of the reek and a sense of lurking malice. Just after this point the tunnel forked. The left side was shut by a door while the right side continued. The upper part of the tunnel near the east entrance was blocked by thick webs.[1]

The door in the left tunnel led to the Under-way that ascended to the Undergate, the subterranean gate to the Tower of Cirith Ungol.[2]

Shelob had dwelt for an age in her lair. Before Sauron had returned to Mordor she had gotten sufficient food, but as his power grew, living things forsook his borders and she grew ever hungrier. Orcs had to use the tunnel and often delved new passages to avoid the spider, yet she found other ways to ensnare them and survive.

On 12 March T.A. 3019 Gollum lead Frodo and Sam into the western end of the tunnel. As their senses dulled they did not realize that Gollum had separated from them, rushing on ahead. Together the two hobbits passed the openings until they came to the fork in the tunnel, where they realized that Gollum had abandoned them. Hearing a gurgling, bubbling noise followed by a venomous hiss, Frodo drew out the Phial of Galadriel and he and Sam beheld Shelob. They began to run but, realizing the folly of this action, Frodo unsheathed Sting and with the Phial advanced on the great spider, who withdrew. Turning, the two hobbits resumed their upward progress towards the east end. When the exit was in sight they were stopped by webbing strung across the tunnel. Since Sam’s blade could only cut a single strand after much work, Frodo gave him the Phial and easily sliced through using Sting. Gollum waited in the tunnel until he could rush out to attack Sam. When Sam got the better of him Gollum fled back into the darkness.[1]

After Frodo had fallen, orcs came upon him from both the tower to the east and from the tunnel to the west. They carried him, with Sam following, back into the tunnel. Before Sam could catch up the orcs shut the Undergate and rushed on to the tower. After listening to the orc-leaders speak, Sam discovered that the Undergate had an opening at the top. He was able to get through it and chase after the orcs through a winding tunnel.[2] However, unable to enter the tower from the Under-way, Sam later retraced his steps and exited through the main tunnel on the way to the tower.[3]

The Sindarin name for Shelob's Lair was Torech Ungol, translated as "tunnel of the spider" (composed of torech and ungol).[4]

In the early stages of writing The Lord of the Rings Shelob and her lair did not exist. On the First Map of The Lord of the Rings Kirith Ungol was the great northwest pass into Mordor[5] (instead of the Morannon and Udûn) and it was inhabited by many spiders greater than those of Mirkwood.[6]

In Scene 38, "Shelob’s Lair", rather than having a mile of pathway leading to a great grey wall, the entrance to the tunnel appeared after a short bend in the trail. Gollum and Frodo reached the tunnel entrance without Sam (whom Frodo had sent away but was following some distance behind). Frodo enters first but Gollum soon scampers past him and disappears. Instead of a long, smooth tunnel, Frodo immediately encounters a maze bestrewed with webbing. Since the audience needs to see the action the tunnels are never pitch dark and many dead hanging things are seen. Falling and struggling in the webbing, Frodo pulls out the Phial of Galadriel just before Shelob attacks. The light and a quick blow from Sting repels the spider and Frodo runs. Dropping the Phial, Frodo gets hung up in a web. As Shelob approaches, Frodo successfully hacks his way clear with Sting, but leaves the sword in the webbing to dive through a small hole, thus escaping the spider.

In Scene 43: "The Choices of Samwise", as Shelob is spinning a web around Frodo, Sam emerges from the tunnel with the Phial and Sting. After Sam is victorious in the fight Shelob retreats into her lair. Since the Undergate was not shown in the movie the approaching orcs only come from the tower and they and Sam do not enter Shelob's Lair again.

Torech Ungol is located in the Morgul Vale, and is able to be fully explored by adventurers. After the War of the Ring, Shelob, who had survived her wounds from Samwise, began to summon all of her children from across Middle-earth to her lair. Shelob can be briefly encountered in a quest instance, and her lair also serves as the passage into the Remmorchant, presumably Shelob's inner sanctum.