Shelob had an out-thrust head with two great clusters of many-windowed eyes[1] and great horns and a short stalk-like neck.[2] Her head had a beak that dribbled venom.[3] She had a huge body that looked like a bloated bag. Her body was black and blotched with livid marks with a pale and luminous belly. She had bent legs with great knobbed joints that were located high above her back. Her legs had hairs that stuck out like steel spines and had a claw at each of their lower ends.[2] Shelob also had a sting. Her skin was so thick that it could not be penetrated with the strength of a man, Elf or Dwarf, because it consisted of many layers of growth. Her eyes were the only softer spot.[3]

Shelob was born as the last child of the spider-like demon Ungoliant[4], who had mated with and devoured other creatures of spider form in the valley of Nan Dungortheb in the mountains of Ered Gorgoroth in Beleriand in the Elder Days.[5]

Shelob fled from ruin (apparently from the drowning of Beleriand in the War of Wrath). It is not known how she came to the Ephel Dúath. However, she had already established her lair high in Ephel Dúath in Mordor before Sauron claimed that land as his own and before he started to build the Barad-dûr around S.A. 1000[6]. She mated with her offspring which she slew, and her smaller descendants spread from valley to valley from the Ephel Dúath to the eastern hills, to Dol Guldur and to Mirkwood.[4][7]

Shelob fed off all living things, such as Elves and Men. As the power of Sauron grew, people left the borders of Mordor and Minas Ithil was conquered by the forces of Sauron. Elves and Men no longer came near to her lair and Shelob had to resort to hunt for Orcs, which according to Gollum, she considered to be poor food.[4] Sauron knew that Shelob lived in hear lair, but allowed her to dwell there, because she was an excellent guard of the pass of Cirith Ungol that led to Mordor and because he could spare the Orcs that she occasionally caught. He even sometimes had prisoners driven to her hole and ordered to report to him how she played with them and referred to her as his cat.[8] 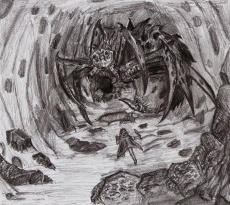 In T.A. 2980[9] while looking for the One Ring, Gollum encountered Shelob. He had bowed to her and promised to bring her food.[4] Shagrat, the captain of the Orcs of the Tower of Cirith Ungol supposed that Gollum was not good to eat for Shelob and it seemed to him that Gollum had an understanding with her.[10] At some time between the years T.A. 3009 and 3017 Gollum went to Mordor and was captured by Sauron.[11] It is possible that he entered Mordor through the pass of Cirith Ungol. When Gollum was released from Barad-dûr in T.A. 3017 [12], the Orcs of the Tower of Cirith Ungol had been ordered to let him pass and Shagrat knew that Gollum had used the Stairs of Cirith Ungol once or twice since then and referred to Gollum as Shelob's Sneak.[10]

Indeed, Gollum slipped away while Samwise Gamgee and Frodo Baggins were resting after they had climbed the Stairs of Cirith Ungol on their way to Mount Doom[13] and visited Shelob again on 11 March T.A. 3019.[14] On the next day on March 12 T.A. 3019.[15] Gollum led Sam and Frodo into the tunnels of Shelob's Lair and abandoned them in the dark.[16]. He planned that Shelob would eat Sam and Frodo so that he could find the One Ring among the bones and clothes, which Shelob usually left behind.[4]

After Frodo had used the Phial of Galadriel as a source of light and he and Sam were able to see two great clusters of many-windowed eyes of Shelob. When Frodo drew his sword and advanced on Shelob holding the phial up in the air, Shelob fled from the brightness of the phial.[17] Frodo and Sam were able to flee from the tunnel to the outside to the pass of Cirith Ungol,[18] but Shelob caught up with Frodo and stung him in the neck with her venomous sting, which caused a death-like coma.[19] Sam managed to defeat her by letting her impale herself upon Sting when she tried to crush him under her massive body and using all power of the Phial of Galadriel to blind her. Wounded, she fled to her lair and was not seen for the remainder of The Lord of the Rings.[20]

Thinking Frodo was dead, Sam took the One Ring from him and left his body behind, but discovered later that Shelob's venom was not intended to kill its victims but only to render them unconscious to keep their meat fresh.[21]

It is not known if Shelob lay for years in her lair to heal herself from within and to rebuild her eyes until with hunger like death she was able to hunt again in the valleys of the Ephel Dúath.[22] She may also have eventually died of starvation caused by her inability to hunt while blind.[7]

Robert Foster mistakenly classified the name as Sindarin, failing to provide a translation.[7]

In an earlier unpublished version of the chapter that would later have the title Shelob's Lair the description of the great spider-like creature was almost identical,[26] but its name was Ungoliant[27] or Ungoliante[28].

It has been considered that the giant spider which a hero fights is similar to creatures that appear in the works of Edgar Rice Burroughs, but Tolkien explicitly denied a direct influence.[29]

Shelob is known to Elves as "Ungwetári" and Lord Celeborn had hunted her down in the early years of the Third Age, to no avail. Shelob has a mental link to her children and after being stabbed by Samwise she summons all of her children to her side for nourishment and protection. Places formerly infested with spiders such as Mirkwood become empty as whole nests of them travel south to the call of their mother. Shelob herself is depicted as much larger than other giant spiders, which are encountered in the game on numerous occasions. Shelob herself is the last boss in the main raid of the Minas Morgul expansion.