The Phial of Galadriel by John Howe

"And you, Ring-bearer,' she said, turning to Frodo. 'I come to you last who are not last in my thoughts. For you I have prepared this.' She held up a small crystal phial: it glittered as she moved it, and rays of white light sprang from her hand. 'In this phial,' she said, 'is caught the light of Eärendil's star, set amid the waters of my fountain. It will shine still brighter when night is about you. May it be a light to you in dark places, when all other lights go out."
― The Fellowship of the Ring, "Farewell to Lórien"

The Phial of Galadriel, or star-glass or Lady's glass, was the gift that Galadriel bestowed to Frodo Baggins. 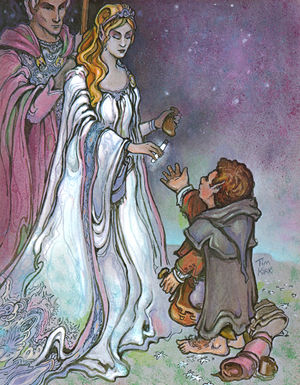 Galadriel gave Frodo this gift upon the Fellowship's departure from Lothlórien.[1] It would stay among his possessions unused until reaching the edge of Mordor.

Soon after the Breaking of the Fellowship, the night fell upon the Three Hunters, so Gimli wished that the Lady had given to them a light like Frodo's, but Aragorn remarked that Frodo would need it more.[2]

As Frodo, Samwise Gamgee and Gollum approached the Stairs of Cirith Ungol, Frodo saw a great mass of cavalrymen led by the Lord of the Nazgûl. When the Witch-king stopped, Frodo feared they had been spotted; against his will, Frodo moves his hand towards the ring. Instead, he touched the phial - which he had forgotten - and the Witch-king continued on his way. The next morning, he made use of the phial again while leaving Minas Morgul behind.[3]:706-708

Frodo used the phial to fend off the attacks of Shelob, but he was eventually poisoned by her.[4] Sam could defeat the spider thanks to the Phial, and escaped her lair after taking the star-glass with him, excusing himself to Frodo's body.[5] Sam and Frodo later used it to overcome the will of the Two Watchers at the Tower of Cirith Ungol.[6] Sam also attempted to use the light in the Crack of Doom, but the light from the glass faded because they were in the heart of Sauron's domain.[7]

Upon Frodo's departure from Middle-earth, the light from the phial faded as it reached the shores of Eldamar.[8]

Galadriel explained that her phial contained the light of the Star of Eärendil as reflected in her Mirror.[1] As Sam remembered to Frodo, the light of this star was the same Silmaril recovered by Beren, now hold by Eärendil. This made them part of the great tales of the past.[3]:712

The Phial is absent as Galadriel does not give any gifts to the Fellowship.

The Phial is found by Sam in Frodo's cloak and is used to pass the Watchers' barrier in Cirith Ungol. Its origins are never touched on in the film. Frodo identifies it as the Phial of Galadriel, but refuses to say anymore about where he acquired it.

The Phial is given to Frodo by Galadriel in the first film. It reappears in Return of the King, used by Frodo to ward off Shelob although he drops it in his escape. It is retrieved by Sam and wielded in his battle against Shelob.

When the White Council arrives to rescue Gandalf, Galadriel use the phial to cast Sauron out of Dol Guldur, rebuking him as a "servant of Morgoth" without name, face, or form.