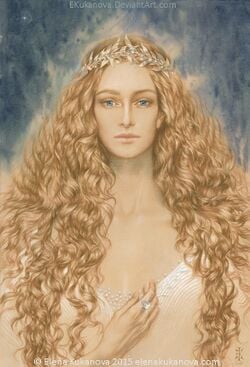 The hair of Galadriel was described as golden touched with silver and seemed to shine with the light of the Two Trees of Valinor.

"...and her hair was held a marvel unmatched. It was golden like the hair of her father and of her foremother Indis, but richer and more radiant, for its gold was touched by some memory of the starlike silver of her mother; and the Eldar said that the light of the Two Trees had been snared in her tresses."
― Unfinished Tales, "The History of Galadriel and Celeborn"

Many thought that this first gave to Fëanor the idea of imprisoning and blending the light of the Trees, that later became the Silmarils. He admired her hair so much that he requested a tress three times, but she refused each time and would not give him even a single strand.[1][2]

Millenia after, Gimli of the Fellowship of the Ring was asked which gift he would like prior to leaving Lothlórien, and he responded:

'There is nothing, Lady Galadriel', said Gimli, bowing low and stammering. 'Nothing, unless it might be - unless it is permitted to ask, nay, to name a single strand of your hair, which surpasses the gold of the earth as the stars surpass the gems of the mine. I do not ask for such a gift. But you commanded me to name my desire'.

Galadriel's response surprised all of the Elves: she granted Gimli's wish and gave him three golden strands of her hair, which Gimli promised to set in crystal as a "pledge of good will between the Mountain and the Wood until the end of days."[3]

In the early drafts of The Lord of the Rings, there is no dialogue between Galadriel and Gimli when she is giving her gifts to the Company.[4] In the following draft, when Gimli is asked, he answers to Galadriel that he is contented with having seen her. Then she took a brooch off herself, an emerald set in gold, and gave it to him. Gimli tried to apply the name Elfstone to himself, but he was stopped by J.R.R. Tolkien, who decided to use that name for Aragorn.[5]