Barad-Dûr was the greatest fortress ever built since the Fall of Angband. It was founded upon a mighty iron mountain throne above immeasurable pits and appeared even blacker and darker than the mantling clouds and shades in which it stood. It was immeasurably strong with its countless gargantuan towers, walls and battlements and was made of very hard and unbreakable substances.[2] Usually it was described as made of steel, iron or adamant. It had gaping gates, great courts and dungeons with deep and terrible prisons.[1] The topmost tower contained the Window of the Eye.[3]

Sauron began to build Barad-dûr in around S.A. 1000, choosing Mordor as a land to make into a stronghold.[4] Around S.A. 1600 he secretly forged the One Ring in the fires of Mount Doom and completed his fortress after 600 years of the construction with the power of the Ring.

During the following years Sauron was able to consolidate his power and extend it into the east.[5] However, in S.A. 3262, Ar-Pharazôn, king of Númenor, landed at the Haven of Umbar with a great host and marched north to Mordor. Their splendour and might was so great that Sauron humbled himself before the king and came to Númenor as a hostage.

The year after the Downfall of Númenor in S.A. 3319 Sauron's spirit secretly returned to Barad-dûr.[4] There he worked a terrible shape for himself, took up again the One Ring and prepared for war against the Eldar and the Exiles of Númenor, who had established their realms in Arnor and Gondor.[5] He succeeded in taking Minas Ithil, but in S.A. 3430[4] Elendil and Gil-galad forged the Last Alliance of Elves and Men and defeated Sauron four years later in the Battle of Dagorlad.[5] Then they passed into Mordor and besieged Barad-dûr. The siege lasted for seven years, Gil-galad and Elendil were slain and in S.A. 3441[4] Sauron was finally defeated.[5] Isildur son of Elendil cut the One Ring from Sauron's hand and took it for his own instead of destroying it. The Dark Tower was finally leveled but its foundations remained[4] since Barad-dûr was created using the power of the One Ring and could not be destroyed as long as that existed. 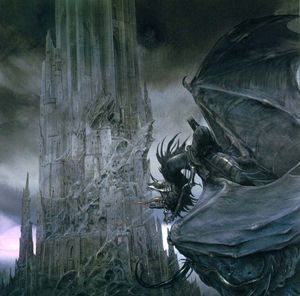 Around T.A. 1050 Sauron returned and secretly made a stronghold at Dol Guldur. Gandalf did not discover that Sauron was the master of Dol Guldur until T.A. 2850, and in T.A. 2941 the White Council attacked the fortress, forcing Sauron to retreat to Barad-dûr, which the Nazgûl had prepared for him, and began to rebuild it in T.A. 2951.[4] It was completed in T.A. 2953,[4] and from then on Sauron stayed in Barad-dûr and conducted his war on the free people of Middle-Earth from there.

The Quenya versions of Barad-dûr are Taras Lúna ("Dark Tower") and Lúnaturco ("Dark Stronghold").[7] They are never used within the narration.

Barad-dûr is portrayed as a simple fortress. During a ring-induced dream, Sam dreams of taking the Ring and storming the Tower, but his common sense gains the upper hand in time.[11]

Barad-dûr is one of the first sites visited. After the Witch-king captures Gollum snooping on the edge of Mordor, the Mouth of Sauron questions the creature in the Dark Tower.[12]