Isildur was the eldest son and heir of Elendil, the first High King of the Realms in Exile.

Isildur was born in Númenor in S.A. 3209. He was the elder son of Elendil, son of Amandil, the last Lord of Andúnië. His younger brother was Anárion. While living in the island realm he married and his first son, Elendur was born in 3299.[2]

Isildur learned from Amandil that King Ar-Pharazôn, under the influence of Sauron, purposed to cut down Nimloth. One night Isildur went in disguise to Armenelos and from the courts of the King stole a fruit from the tree before it was cut down, thus preserving the line of the White Tree. It is said that he received grievous wounds from the King's guards before escaping but that they all healed when a leaf first appeared on the sapling that grew from the fruit he had taken.[3]

When Ar-Pharazôn ordered the Great Armament to assail the land of Aman, Elendil and his sons prepared ships to escape from Númenor. In the ship of Isildur was guarded the young White Tree.[3] When the Downfall of Númenor came in 3319[4] Elendil and his son escaped in nine ships – four for Elendil, three for Isildur, and two for Anárion.[3]

In the great storm that came with the drowning of Númenor the nine ships of the Exiles were borne to the east and scattered. Elendil was cast up in the land of Lindon, passed up the River Lhûn, and founded the realm of Arnor. Isildur and Anárion were carried to the south. Arriving at the mouths of the Anduin, they ascended the great river and founded the realm of Gondor.[5] While the Exiles were establishing their Realms in Exile in S.A. 3320 however, Sauron had also escaped and re-established his power in Mordor .[4]

Isildur set up his house in Minas Ithil, where he planted the White Tree, while Anárion established his household in Minas Anor. However, they jointly ruled the kingdom and set up thrones side by side in the Great Hall of Osgiliath.[5] Isildur and his wife had two more sons, Aratan (in 3339) and Ciryon (in 3379), while living in Gondor.[2]

In 3429 Sauron captured Minas Ithil and burnt the White Tree. Yet Isildur escaped with his wife and sons, and a seedling of the White Tree. While Anárion held Osgiliath, Isildur and his family sailed down the Anduin, then northwest his father in Arnor and to Gil-galad in Lindon.[5][4]

The War of the Last Alliance[edit]

Isildur mural in The Lord of the Rings (film series), art by Alan Lee

In S.A. 3430, the same year that Isildur's fourth son Valandil was born, Isildur's father Elendil and Gil-galad formed the Last Alliance of Elves and Men. The army of the Alliance marched to Imladris in 3431, where Isildur left his wife and Valandil before the host moved on. In 3434 the combined armies of Elves and Men crossed the Misty Mountains and marched on to the Dagorlad. There the forces of Sauron were defeated and he retreated into the Barad-dûr to withstand a siege.[4]

The siege lasted seven years, but finally Elendil and Gil-galad threw down Sauron, thus winning the battle though both were slain and Elendil's sword Narsil broke under him as he fell. Isildur took the hilt shard of his father's sword and cut the One Ring from Sauron's finger. Ignoring the advice of Elrond and Círdan, lieutenant of Gil-galad, Isildur did not destroy the Ring; instead he claimed it as a weregild for the deaths of his father and brother, and an heirloom for his House. [5]

After the fall of Sauron, Isildur returned to Gondor and assumed the Elendilmir, proclaiming his Kingship in Arnor and sovereign lordship over the Dúnedain in both the North and the South. [6][7] He remained for a year in the South, planted the seedling of the White Tree in Minas Anor in memory of his brother Anárion, put the realm to order, and instructed his nephew Meneldil, son of Anárion, in the governance of the land.[8] With Meneldil and a company of trusted friends, Isildur rode about the boundaries of Gondor and in Anórien created the tomb and memorial of Elendil upon the hill of Eilenaer, thereafter called Amon Anwar.[9] While he remained there, he wrote an account on how he acquired the Ring, its significance to his House and where he transcribed a verse around the Ring while it was still hot.[10]

When Isildur finally felt free to leave he committed the rule of Gondor to Meneldil and with his three sons[8] departed on 5 Ivanneth, T.A. 2. Instead of heading west and then north they journeyed northwards along the Anduin in order to first come to Imladris where his wife and little son Valandil were.[5] On the thirtieth day of the journey, 5 Narbeleth, the King, his sons, and his Guard of two hundred knights and soldiers reached the northern borders of the Gladden Fields. Isildur believed that all soldiers of the Enemy perished so his camp was unguarded.[5] There they were ambushed by a band of Orcs said to be ten times their number. 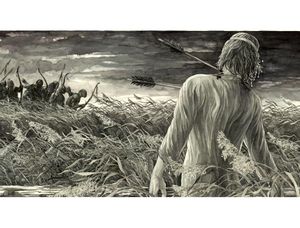 The Death of Isildur by Anke Eißmann

As the Orcs closed in, Isildur sent his esquire Ohtar with one companion to fly with the shards of Narsil. The enemy charged and charged again. One by one Isildur's sons died about him;[8] Elendur was the last and he insisted that Isildur leave with the One Ring. Isildur placed the Ring upon his finger and vanished from the battle.

The Orcs could still sense his smell[5] and Isildur ran to the Anduin and swam across the river. It was during this effort that the One Ring slipped from his finger. As he struggled to escape the reeds and rushes on the shore a small party of Orcs spotted him and shot him. He fell back into the water and no trace of him was found by Elves or Men.[6]

The line of Isildur continued, for Valandil became king of Arnor. Isildur's line continued unbroken throughout the Third Age until it formed the basis for Aragorn's claim to the kingship of Arnor and Gondor after the downfall of Sauron.[11]

In the riddling rhyme "Seek for the Sword that was Broken" the Ring is referred to cryptically as Isildur's Bane.[12]

After the War of the Ring the tower of Orthanc was opened, for King Elessar desired its restoration. Behind a hidden door in a steel closet was found Isildur's Elendilmir. It was surmised that Saruman had found the bones of the long-lost king and had taken the mithril fillet with its jewel for his own, possibly destroying the king's remains afterwards.[6] 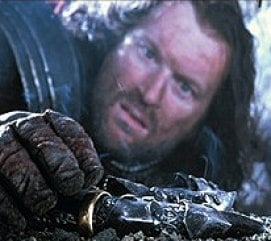 Harry Sinclair as Isildur in The Lord of the Rings: The Fellowship of the Ring

Prince Isildur is mentioned in the prologue, and he is shown to cut the Ring off Sauron's hand in battle, rather than from a defeated Sauron.

Isildur briefly appears in the first scenes of the first film, as well as an extended flashback scene. Isildur is played by Harry Sinclair. Sinclair, a friend of Peter Jackson, was asked because he was the most corrupt looking person Jackson knew. Sinclair had only one line, "No!", which was dubbed by Hugo Weaving.

In the movie, Isildur apparently is the last king of Gondor; Anárion and heirs and Arnor do not appear at all. However, in the Extended Editions both Arnor and the House of Anárion are mentioned, and at times it is clear that Isildur was not the last King, so this might be dialogue error. The story of Isildur's succumbing to the temptation of the Ring bothers Aragorn who fears that he could have the same weakness (a fear that is not evident in the book).

Isildur is portrayed by Maxim Baldry in the Amazon TV series.[14] 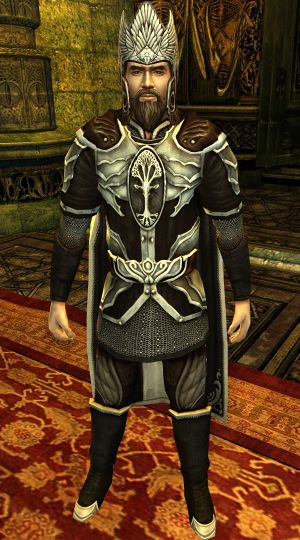 Isildur in The Lord of the Rings Online

In the game starts with a prologue, where you control Isildur on the slopes of Mount Doom. After you complete the mission you see how Isildur defeats Sauron. By completing the Tower of Orthanc bonus level, Isildur becomes a playable character in the other stages, where he takes the place of his descendant Aragorn. Strangely, Isildur's version of the "Tower of Orthanc" level has the same script as Aragorn's, leading to Saruman referring to the ancient King of Gondor as a "ragtag Ranger".

Isildur appears only in cinematics battling Sauron. However, in the expansion pack The Rise of the Witch-king, Isildur is mentioned more detailed in the Angmar campaign.

Isildur makes an appearance in a flashback scene titles "At the Stone of Erech". It covers the oath gives to Isildur by the men of Dunharrow, subsequent return of Sauron several years later, the betrayal of the Dunharrow men and the curse that Isildur lays upon them. He also appears during the Battle of Dagorlad, during the High Elf introduction, as well as in a flashback of the battle.

With Update 24.2, it is revealed that the Shade of Isildur was saved by Gultháva, the River-maiden of the Gladden, who kept the lost king secluded within a secret grotto in order to protect him from harm. He is encountered after the War of the Ring, in an abandoned dwarf-hold situated above the Gladden Fields.

In the game, Isildur is voiced by Nolan North. After his death the Orcs brought Isildur's body to the diminished and vengeful Sauron, who put a Ring of Power on his finger, reviving him as one of his servants and eventually turning him into a ringwraith. As one of the nine Nazgûl, Isildur was forced to serve the Dark Lord for all time until he was defeated and freed by Talion. The ranger later claimed his ring to survive after Celebrimbor abandoned him and eventually took Isildur's place among the Nazgûl after holding back Sauron's forces for decades.