Elendur was the eldest son and Heir of Isildur, slain with his father in the Disaster of the Gladden Fields.

The eldest son of Isildur, Elendur was born in Númenor in S.A. 3299, and escaped the downfall of the island with his family. He was often said to be remarkably similar to Elendil, his grandfather. (Considered "one of the greatest, the fairest of the seed of Elendil.")[1]

In Middle-earth, he stayed by his father's side, and fought with him in the War of the Last Alliance. Isildur had sent Aratan and Ciryon to Minas Ithil to guard against a possible escape, therefore, after the Battle of Dagorlad, Elendur alone accompanied his father into Mordor. Elendur was not present at the final fight with Sauron on the slopes of Mount Doom[2] where his grandfather was killed and his father avenged him. Being the most trusted of his sons, he was the only among his brothers with knowledge of the One Ring possessed by Isildur.[1]

After the war, in T.A. 2, Elendur with his brothers and 200 knights and soldiers, escorted his father back to Imladris. They passed Dagorlad and sought to follow Anduin upstream until Amon Lanc. From there, they followed old Sylvan paths on the eaves of Greenwood. On 5 October, when they were at the Gladden Fields, the company was attacked by Orcs coming from the Misty Mountains, but led by servants of Barad-dûr.

Ciryon was dead and Aratan was dying, and orcs overran them from all sides. Though Isildur had sent Ohtar away to preserve the shards of Narsil, the King still bore the Elendilmir and the Ring, about which Elendur knew. He argued with his father, thinking it was wise for him to flee and abandon them. Isildur did eventually flee, but was pierced by arrows after he swam across the Anduin. Elendur took command of what remained, and was slain with his troops.[1]

Elendur is a Quenya name. Its meaning is not glossed. Helge Fauskanger suggests it was probably intended to mean "Elf-servant", but literally means "Star-servant".[3] The Edain found it difficult to determine whether words and names containing the element el referred to the stars or to the Elves.[4] The first element, elen, was likely taken from his grandfather's name, where it was intended to mean "Elf".[5] The second element, -ndur was likely taken from his father's name, where it means "servant" from the verb "to serve".[5]

The later King of Arnor Elendur was likely named after him.

In early manuscripts Elendur was named "Kiryandil" and his date of birth was S.A. 3318, which made him and not Meneldil the last man born in Númenor.[6] 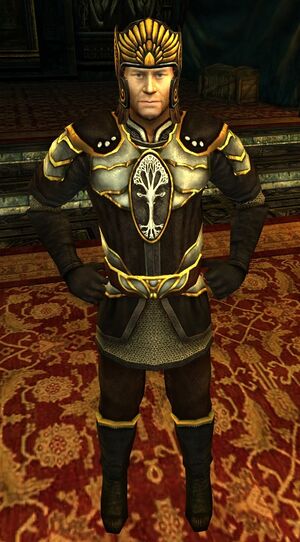 Elendur in The Lord of the Rings Online

The three elder sons of Isildur appear during an extended flashback set during the Siege of Barad-dûr in the year S.A. 3440. However, because the game's license does not cover the works in which they are named, they are referred to only by their war-time aliases, meant to hide their kinship with the King. Elendur uses the name "Meldaran" as his alias.