"Then the watch upon the walls of Mordor slept, and dark things crept back to Gorgoroth. And on a time evil things came forth, and they took Minas Ithil and abode in it, and they made it into a place of dread; and it is called Minas Morgul, the Tower of Sorcery."
― Elrond in The Fellowship of the Ring, "The Council of Elrond"

Minas Morgul (originally called Minas Ithil) was the twin city of Minas Tirith before its fall to the forces of Sauron in the Third Age.

In its prime, Minas Ithil was a beautiful place. The moon cast silver light throughout the courtyards and streets, and reflected off the marble walls, so that it seemed to shine, the houses shining white as well. The city also had one tall tower, with many windows, that rotated slowly. The city was accessed by a road, which was said to gleam like the city's white marble walls, running over a bridge as it crossed Imlad Morgul. Large meadows were placed on both banks of the stream.

When it was taken by the forces of evil, the beauty was replaced by terror. The lovely white light was replaced by a sickly corpse-pale light, the meadows were filled with sick pale flowers, and Imlad Morgul began to steam cold poisonous vapours. At the head of the bridge crossing the stream the bestial and human figures that stood there were corrupted. [1]

Not the imprisoned moonlight welling through the marble walls of Minas Ithil long ago, Tower of the Moon, fair and radiant in the hollow of the hills. Paler indeed than the moon ailing in some slow eclipse was the light of it now, wavering and blowing like a noisome exhalation of decay, a corpse-light, a light that illuminated nothing.
—The Two Towers, "The Stairs of Cirith Ungol"

The Morgul-road crossed the river Morgulduin over a white bridge and then went up the slope in serpentines to the gate of Minas Morgul in the outer circle of its walls on the north side of the city.[2] The gate had the shape of an open mouth that was filled with teeth and had an eye on both sides.[3][4]

After the destruction of Númenor, Isildur and Anárion, the sons of Elendil, landed in Gondor. Isildur built Minas Ithil near the mountainous border of Mordor from where he would rule the fief of Ithilien; while Anárion built Minas Anor to rule over the fief of Anórien. Minas Ithil housed a palantír, the Ithil-stone.

When Sauron returned after escaping Númenor's destruction, he attacked the exiles of Númenor, and his forces took Minas Ithil by storm. When the Last Alliance of Elves and Men defeated Sauron in the year S.A. 3429, Minas Ithil was restored as a watchtower.

After the defeat of the Witch-king of Angmar in the north, he returned to Mordor in T.A. 1980, summoning the other Nazgûl with him to prepare the return of their master. A few years later (T.A. 2000) they laid siege to Minas Ithil and two years later they managed to take the city.[5] The Ithil-stone was also captured and later used by Sauron to influence Saruman and Denethor II.[5][6]

Minas Ithil was occupied by fell creatures, and it changed into a foul, evil place. As a result, it came to be called Minas Morgul, which in the tongue of Gondor means "Tower of Dark Sorcery". Many Gondorians fled from Ithilien.[7]

From Minas Morgul the Lord of the Nazgûl twice challenged his old enemy, King Eärnur. Finally Eärnur rode with his knights against Morgul. He never returned, ending the line of the Kings of Gondor.[5][7]

During the Watchful Peace, the lords of Morgul had secretly bred the Uruk-hai, and in T.A. 2475 these creatures assailed and overran Ithilien. 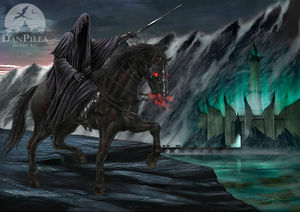 The Nazgul from Minas Morgul by Daniel Pilla

Following the battle, the Army of the West pulled down the bridge leading to Morgul Vale and set its fields aflame. They met no opposition as the entire city's garrison had been killed at the Battle.[8]

After the War of the Ring, Faramir was made Prince of Ithilien by King Elessar, who advised him to make his abode in the Emyn Arnen south-east of Minas Tirith for "Minas Ithil in Morgul Vale shall be utterly destroyed, and though it may in time to come be made clean, no man may dwell there for many long years".[9] It is not known if the city was ever rebuilt.

Minas Morgul was situated deep within a long-tilted valley, that ran back far into the mountains. Some way within the valley’s arms, high on a rocky seat upon the black knees of the Ephel Dúath, stood the walls and tower of the city. The city could be accessed from the west by a road that led from the crossroads in Ithilien, eventually spanning a white bridge that passed over the stream in the midst of the valley, and went on, winding up past the city’s gate.

Although no eastern gate to the city is described it can be assumed that there was another entrance facing towards Mordor as it was from Minas Morgul that the armies of Sauron issued forth in the War of the Ring.

The Nazgûl are shown exiting the fortress, beginning their search for Bilbo Baggins who is in possession of The One Ring.

Frodo, Sam, and Gollum pass the fortress during their journey to Mordor. It is portrayed as dark with sharp walls, illuminated by a green, hazy light. Frodo, influenced by the power of the Ring, approaches the entrance to the city, but is stopped by Sam and Gollum. A large army and the Witch King mounted on a flying fell beast are shown exiting the city, signifying the start of the Battle of the Pelennor Fields.

During the march of the Host of the West towards the Black Gate Gandalf destroys the bridge leading out of Minas Morgul to prevent Aragorn's armies from being flanked. After the downfall of Sauron this action has an unintentional effect of protecting the Dead City itself from any attack from the west. Following Aragorn's coronation, King Elessar charges steward Faramir and the Rangers of Ithilien with reclaiming the Morgul Vale and cleansing the Dead City.