"[Faramir] is bold, more bold than many deem; for in these days men are slow to believe that a captain can be wise and learned in the scrolls of lore and song, as he is, and yet a man of hardihood and swift judgement in the field. But such is Faramir. Less reckless and eager than Boromir, but not less resolute."
― Beregond in The Return of the King, "Minas Tirith"

Faramir was the last Ruling Steward of Gondor and the first Prince of Ithilien.

The second of Denethor's two sons, Faramir was briefly the Ruling Steward after his father's death. Upon the arrival of the true king, King Aragorn Elessar, he laid down his office, but Elessar renewed the hereditary appointment of Steward as the advisor to the King. Faramir was also appointed Prince of Ithilien.[6] 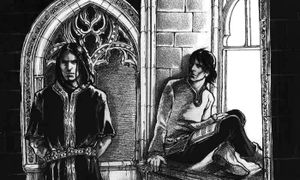 He grew to become a brave warrior admired by his soldiers, although unlike his brother he did not care much for battle and arms and needless danger. He gained from the wisdom of Gandalf who visited Minas Tirith, and loved lore and music; his gentle nature (and love of Gandalf) displeased his father. Although Denethor grew cold and grim and favoured Boromir over him, there was no rivalry between the brothers; Boromir was always his helper and protector.[7]

Twice Faramir had a prophetic dream and didn't speak about it, until he saw it again with his brother. The following day saw Sauron's attack on Osgiliath which started the War of the Ring. The two brothers commanded the defences of Osgiliath. They protected the last bridge across the Anduin until it was destroyed. Only the two brothers and two others survived by swimming.[8]

Seeking clues for the dream, Boromir set out for Rivendell.[8] Faramir never heard from his brother again, until the Great Horn was heard in Minas Tirith, and a few days later he saw Boromir dead in a funeral boat, prepared by his companions, floating the Anduin.[9]

On 1 March, his father sent him for an errand to Ithilien where Faramir went to command the Rangers of Ithilien.[9] 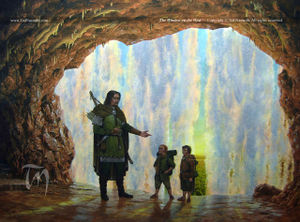 The Window on the West by Ted Nasmith

During the night, Faramir's watch spotted Gollum fishing in the Forbidden Pool. Faramir called Frodo to him who confessed to the part of Gollum in their errand, begging Faramir not to slay him. Gollum was caught and questioned and then surrendered to Frodo. The following morning[9] Faramir released Frodo and Sam (with Gollum), but warned them strongly against taking the pass of Cirith Ungol.[12] Faramir with his men also left the refuge the next day.[9]

Faramir returned to Osgiliath, supervising the defence there. However he retreated over the Pelennor Fields to report to Denethor on 10 March[9] and was almost caught by the Nazgûl on their Fell beasts, but was saved by Gandalf. Faramir reached Minas Tirith, telling Denethor and Gandalf of what befell in Ithilien, but the next day he departed to Osgiliath[9] to supervise the defences at his father's bidding. In this venture the host of the Witch-king came upon Osgiliath and on 12 March Faramir retreated to the Causeway Forts.[9] He was struck down by the Black Breath and only a sortie by Imrahil and his knights saved the wounded (including Faramir) from that onset and on 13 March they were brought to Minas Tirith.[13][9] 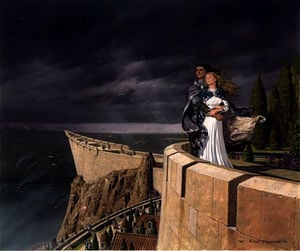 The Sun Unveiled by Ted Nasmith

Faramir remained out of action for the rest of the War of the Ring. During the Battle of the Pelennor Fields Denethor planned to burn his stricken son alongside him and Faramir was once again saved by Gandalf, though Denethor completed his suicide.[14] After this he was taken to the Houses of Healing and healed by Aragorn after the battle.[15] Faramir spent the rest of the war recovering in the Houses of Healing where he met Éowyn, also grievously wounded.[16] The two fell in love and were married after the war.[17]

After the War of the Ring[edit]

After the destruction of the One Ring and the Battle of the Morannon, Faramir, as Steward, led the ceremony in the crowning of Aragorn as King of Gondor and Arnor.[18] Aragorn reinstated the original role of the Stewards before the failing of the Kings of Gondor and made Faramir the Prince of Ithilien. As Prince of Ithilien, Faramir was one of the two Chief Commanders of King Elessar and his duty was to guard and maintain the eastern borders of Gondor. He also defeated the remaining enemies and cleansed the Morgul Vale.

Faramir is never glossed, and neither is indicated if it is Quenya or Sindarin.

As all the Kings of Gondor and their heirs had names in Quenya,[20] and the name is also attested as a name of the royal family (in the case of Faramir son of Ondoher) the name apparently is Quenya.

Faramir is played by Friedhelm Ptok.

David Wenham plays Faramir in this adaptation. He does not at first let Frodo, Sam, and Gollum go, but decides to bring them and the Ring to Gondor. He takes them west to Osgiliath, crossing the river Anduin, and not until the Ringwraiths attack the city does he release them. Many fans of the book criticise this change, saying that it seriously damages the character, who is meant to emulate the medieval chivalric code and contrast with Boromir. Peter Jackson's explanation is that he needed another adventure to delay Frodo and Sam, because the episode at Cirith Ungol was moved to the third movie, and so a new climax was needed. Another explanation often cited is that it was felt that for dramatic reasons it was necessary to show character development, which meant that Faramir had to go through some kind of struggle or difficult decision. Jackson also argued that it was necessary for Faramir to be tempted by the Ring because everyone else was tempted, and letting Faramir be immune would be inconsistent, at least in the eyes of a film audience, and would weaken the films' portrayal of the Ring. However, despite these comments, Aragorn still resists the Ring easily at the end of the first movie, which acts as a contradiction to Jackson's claim.

The voice of Faramir is provided by Jozef Vajda. The same actor also portrayed Faramir's brother Boromir earlier in the radio series.