Eldarion was the second High King of the Reunited Kingdom. He was the only son of King Elessar and Queen Arwen Undómiel.

Eldarion was born in the first year of the Fourth Age. He did not inherit the choice of becoming an Elf, but had a long youth like one, having an appeareance of 20 years old until 60.[4] Eldarion became the second King of the Reunited Kingdom after the death of his father Elessar in Fo.A. 120.[2] At the time of his ascending to the throne, Eldarion was "full ripe and ready for kingship". It is known that Eldarion was given the tokens of kingship (Andúril, etc.) by his father, who died soon after the crowning of his son.[2] He was also recorded to have several sisters.[2]

During Eldarion's reign, Findegil served as the royal scribe (or King's Writer). In Fo.A. 172, Findegil wrote a copy of the Thain's Book for the Thain of the Shire, probably at the request of Peregrin Took's great-grandson. This copy was the only one to include Bilbo's complete Translations from the Elvish, which Bilbo had composed while at Rivendell during his 'retirement' there.[5]

It was foretold that he should rule a great realm, and that it should endure for a hundred generations of Men after him, that is until a new age brought in again new things; from him should come the kings of many realms in long days after.[6]

His name is Quenya. Paul Strack explains it means "Son of the Eldar", being a compound of Eldar and patronymic -ion.[7] In Letter 338, J.R.R. Tolkien spelled this name Eldaron, this is probably a typographic error.[1]

Eldarion was descended from several royal Elven houses, including the Three High Kings of the Elves, and from the Edain. He was a grandson of Elrond and, through his grandmother Celebrían, a great-grandson of Galadriel. He was the great-grandson of Eärendil the Mariner (Eldarion is descended from Eärendil on both sides of his family and in him the two genealogical lines of the Half-elven are reunited), through his Half-elven mother Arwen; he was also the nephew of the Half-elf lords Elladan and Elrohir. He was descended also from the great Kings of Westernesse on his father's side.[3] Tolkien mentioned the existence of descendants, whose only known fact is that they possess a normal life span (around 80-90 years)[8].

In an unfinished story set some 220 years after the fall of Sauron, the Reunited Kingdom encountered a renewal of Morgoth-worship known as the Dark Tree.[9] However, J.R.R. Tolkien did not finish this story, because he "discovered that the King's Peace would contain no tales worth recounting".[1] 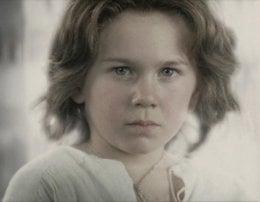 Eldarion in The Lord of the Rings: The Return of the King

While Arwen is on her way to the Grey Havens to leave Middle-earth and Aragorn, she has a vision of her future son, which persuades her to stay. The boy (not named until the credits) is played by Sadwyn Brophy, son of Jed Brophy.