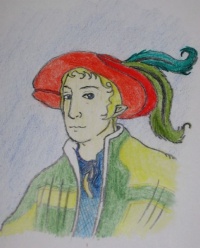 Thain is an alternative spelling, found in Middle English texts, of the Early Modern English word thane. The word is derived from Old English þegn, which meant a person holding lands from the king in exchange for military service. The spelling "thane" appears in the verse from “The Muster of Rohan” which begins "From dark Dunharrow in the dim morning/with thane and captain rode Thengel’s son."

For nearly four hundred years after its foundation, the Shire had been part of the lands of Arthedain, and under the rule of that land's King. Ultimately, Arthedain fell to the forces of Angmar, and its last King, Arvedui, was lost in T.A. 1975,[2] leaving the Shire-hobbits without a ruler. They remedied this by choosing a new leader from among themselves, Bucca of the Marish, who was given the title thain, a word simply meaning "chief" in their dialect.

In origin a military office, Thainship passed strictly through the male line.[3]

Bucca and his descendants, a family known as the Oldbucks, served as Shire-thain for twelve generations. The twelfth Thain, one Gorhendad Oldbuck, left the Shire and crossed the River Brandywine to found Buckland.[4] With his departure, the Thainship passed to a new line, the preeminent Tooks, and specifically to Isumbras Took I.[1]

As a rule, the Thain was also the head of the Took clan (known as "The Took") and the Great Smials, but the two offices were not identical; one example illustrating the difference was the case of Thain Ferumbras III: He inherited the Thainship from his father, Fortinbras II, but his mother Lalia Clayhanger remained the head of the Tooks.[3]

But as the times of emergency in the Shire were rare, as the need for the muster and the moot (the only battle was fought in T.A. 2747 and the last emergency in T.A. 2912), the title ended up as nothing more than nominal. Indeed, there was no "government" in the Shire as the clans managed their own affairs.[1]

From Isumbras I, the line of the Took Shire-thains continued unbroken to the time of the War of the Ring and beyond with Peregrin I when thainship became also a Counsellor office of the North Kingdom.[5]

The last recorded Thain was his son, Faramir Took I, the thirty-fourth to hold the title of Shire-thain.[5] The fact that both he and his father Peregrin Took are recorded as the first of that name shows that there must have been more Thains after this time, and the office clearly lasted well into the Fourth Age.

Peregrin's successors continued the custom of gathering many Gondorian manuscripts mainly copies or summaries of legends relating to Elendil and his heirs, and the libraries of Great Smials were the only place in the Shire with sources of Númenorean interest. Pippin's great-grandson (not known if he was a Thain himself) requested a copy of the Thain's Book, completed for him by Findegil.[6]

It is known that there were at least thirty-three Shire-thains, from Bucca of the Marish, who became Thain in T.A. 1979, to Faramir I, who took on the title in Fo.A. 63, more than a thousand years later.