(Redirected from Of the Ordering of the Shire) 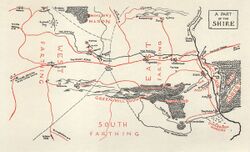 Of the Ordering of the Shire[edit]

Of the Finding of the Ring[edit]

Note on the Shire Records[edit]

"Concerning Hobbits" derives from a text providing background information on the Hobbits, written in the latter half of 1938, while rewriting the Lord of the Rings.[1]

The basis of "Concerning Pipe-weed" was a lengthy speech of Merry about pipe-weed in a draft of the chapter The Road to Isengard, eventually removed and reworked.[2]

The Prologue was further worked with more background material, during Tolkien's final proofreading in 1949.[3]