Buckland was a small but densely populated sliver of land between the Old Forest and the east bank of the Brandywine river,[1] inhabited by Hobbits from the Shire. Most were of the Brandybuck family, who colonized the land. Buckland was thus technically not part of the Shire itself, and was effectively a tiny independent country. 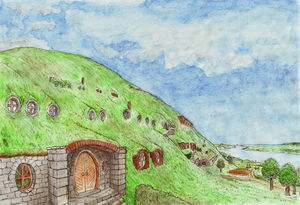 740 years after the founding of the Shire, in T.A. 2340,[2] Gorhendad Oldbuck crossed the River Brandywine from the Eastfarthing and started the building of Brandy Hall in Buck Hill, in a land hitherto unpopulated by hobbits.[3]

As Gorhendad's family grew, the Hall also expanded, and soon there was a flourishing community in the land between the River and the Old Forest. From that time, Buckland was ruled by the Brandybucks (as Gorhendad renamed his family to reflect their new relationship with the river). Gorhendad became the first 'Master of Buckland'.[3]

The village of Bucklebury, lying close by Buck Hill, was Buckland's chief village,[3] but with the expanding population, many other villages soon grew up in the region, the largest of which were Newbury, Crickhollow and Standelf.[1] The growing power of the Master of Buckland gained respect from those close by in the Eastfarthing, too; the lands of the Marish between Stock and Rushey also acknowledged themselves under the sway of Brandy Hall.[4]

The Bucklanders soon found themselves threatened by the strange trees of the Forest, and so built a vast hedge, the High Hay, stretching twenty miles along the eastern border of their land.[5] This was not the only danger to threaten Buckland - in T.A. 2911, the year of the Fell Winter, the Brandywine froze[6] and Buckland was invaded by white wolves.[7][8] 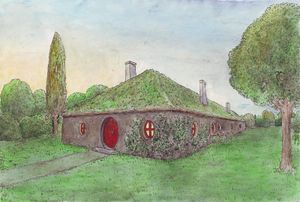 Buckland was also the childhood home of Frodo Baggins,[9] who returned here on his journey to Bree in T.A. 3018.[10] He bought a house in Crickhollow, and claimed that he would be living there,[11] but instead entered the Old Forest through the old private[10] gate of the Brandybucks through the High Hay, and left the Shire.[12]

Buckland was technically not part of the Shire (as granted by the King of Arthedain), and was indeed formed over 300 years after Arthedain ceased to exist. Buckland may actually have been in what used to be considered part of Cardolan and may never have belonged to Arthedain, further making its colonization an independent action by the Hobbits. Thus, Buckland was essentially a small independent country of Hobbits, mostly of the Brandybuck family.

However, it was effectively not much different from other Hobbit family homelands (such as the Tookland, which the Tooks were effectively controlling). Authority in the Shire had become so bucolic and decentralized that no one took the time to assert these rival claims. Parts of the Marish, part of the Shire-proper, acknowledge the authority of the Master of Buckland and not the Thain of the Shire.

In practice, Hobbits from the Shire-proper seem to have considered Buckland an odd frontier of "the Shire" more than as a separate country.

The Bucklanders did have certain peculiarities. There was an ubiquitous sentiment in other regions of the Shire (such as Hobbiton and Bywater) that "there's queer folk in Buckland".

Due in part to the Fallohidish blood of the Brandybucks, they were somewhat more adventurous than their cousins in the Shire (while still conservative by the measure of many other races in Middle-earth). The Bucklanders are characterized as being of predominantly Stoor ancestry, and were thus a people accustomed to riversides. They enjoyed boating, an activity frowned upon by Shire-hobbits, and some of them could even swim. Due to the often muddy nature of the land near the river, it was not uncommon for Bucklanders to wear boots, making them the only Hobbits known to wear shoes.

When the Bree-folk ventured to the Shire, Buckland was their usual destination (though some ventured as far as the Eastfarthing), and so was rather more cosmopolitan (in hobbit terms) than the rest of the land.

Living under constant danger from the Old Forest, the Bucklanders were hardier and more suspicious than the usual Shire-hobbit. They were organised to deal with danger (through the famous Horn-call of Buckland), and they kept their doors locked at night, which was unusual in the Shire.

There were some minor linguistic regional differences between Buckland and the Shire (perhaps also in the accents) as the Bucklanders, being descended from the Stoors, inherited the Stoorish linguistic features. Also, Hobbits of Stoorish blood are noted as being the only Hobbits who are known to normally grow facial hair.

In the Prologue to the Fellowship of the Ring Tolkien states:

Outside the Farthings were the East and West Marches: the Buckland; and the Westmarch added to the Shire in S.R. 1452.[13]

Earlier editions do not have the semicolon and give the year as 1462.

Without the semicolon, the sentence seems to imply that not only Westmarch, but also Buckland was added to the Shire in Fo.A. 31 (or Fo.A. 41 according to the old edition).

Several reference works interpret the phrase in such a way, and refer to it as "Eastmarch", although Tolkien used the spelling "East March"[13], and the area is still typically referred to as "Buckland".

Robert Foster says: Buckland was officially added to [the Shire] by the gift of King Elessar in FA 42 and was then known as the East March.[14]. Note also that his dating of FA 42 mirrors the earlier uncorrected date of the Prologue.

The semicolon in the above quote, which separates Buckland from Westmarch, was added to show that only "the Westmarch added to the Shire". That is consistent with various other references, such as that the Appendix B mentions the creation of the Westmarch in Fo.A. 31, but there is no reference to Buckland or an "Eastmarch" under that year.[16]

The word buck means "goat" or "deer", and comes from the family name Oldbucks.

Buckland and Little Buckland are real places in England, located just to the south of Evesham.[17] The etymology of these towns comes from book (i.e. The Bible), referring to a land that was owned by a church or a written charter.[18] There is a Buckland in the former county of Brecknockshire (modern day Powys), Wales in the parish of Llan-sant-ffraid. The gloss for this Welsh Buckland exactly matches Tolkien's instructions in Nomenclature for translating the name Buckland. It means the "land of the deer".[19]