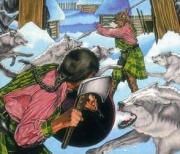 Like the earlier Long Winter (T.A. 2758 – 2759), the Fell Winter began in November.[source?] This time Sauron was not able to launch a full attack, as the War of the Dwarves and Orcs of a full century earlier had eliminated most of the Orcs in the north, and the Haradrim had been badly defeated in 2885.[1]

The winter was also less harsh than the Long Winter, and snow and ice stopped in Eriador at the Greyflood River, and in Wilderland in the middle of Mirkwood. Nevertheless there were severe problems, as food again ran short, and the Hobbits of the Shire were attacked by White Wolves which crossed the frozen Brandywine river.[2] It was on this occasion that the Horn-call of Buckland had been sounded; it was not heard again until Black Riders invaded Buckland in 3018.[3] Gandalf and the Rangers of the North had to provide food for the Hobbits to prevent them from dying of hunger.

In March when the winter ended great floods of meltwater rushed down Greyflood, and the city of Tharbad was ruined and its bridge broken. The people of Enedwaith also suffered greatly as their lands were flooded.[1]