Bree was a village in Middle-earth, east of The Shire and south of Fornost Erain.

Directly west of Bree were the Barrow-downs and the Old Forest. Bree was the chief village of Bree-land, a small wooded region near the intersection of the main north-south and east-west routes through Eriador. Bree-land was the only part of Middle-earth where Men and hobbits dwelt side by side and Bree had a large population of Hobbits.

The village was built under and around a part of the Bree-hill and was surrounded by a deep ditch and a hedge. The great East Road passed through this hedge on its western side, and the southern corner where the hedge and dike met the sides of the hill. At both of these points stood a gate that was closed and guarded after nightfall. The West-gate of Bree was guarded by one Harry Goatleaf during the War of the Ring.[1]

Buildings were built on both sides of the road, and some, like The Prancing Pony, near the slopes of the hill. The hill itself was burrowed by Hobbit-holes.

The Bree-land area was settled in the Second Age by Men from Dunland. Surviving the wars and chaos of that time, it became part of the kingdoms of Arnor, and then Arthedain (though the region from Bree to Weathertop was claimed by Cardolan).[2] Bree was by its nature a trading community, due to being located at the major crossroads of the East Road, which ran from the Blue Mountains and the coast to Dale in the far East; and the old north-south road between Arnor and Gondor.

Around T.A. 1300 Bree, as well as Staddle, saw the arrival of the Hobbits who were fleeing from Angmar. In T.A. 1601 a large population of Hobbits left Bree and went west beyond Baranduin and founded a new country within Arthedain, The Shire.[3]

After the Fall of Fornost and Arnor, the north-south road had fallen out of much use and was more commonly referred to as the Greenway due to its disrepair. Trade had of course drastically declined in the thousand years since but Bree maintained a certain independence and continued to thrive without any central authority or government, with the unknowing protection of the Rangers of the North. Even at the end of the Third Age Bree remained relatively prosperous. Bree was the most westerly settlement of men in all Middle-earth by the time of the War of the Ring and had a sizable Hobbit population. Thanks to its location on major trade routes, one could encounter travelers from all sorts of distant lands in a bustling Bree inn. The Rangers of the North also were known to stop in Bree for resupply.

Bree is the place where seemingly by accident, Gandalf and Thorin met on 15 March T.A. 2941. They were both thinking about the same problem: the Dragon Smaug at the Lonely Mountain. The meeting led to the undertaking of the Quest of Erebor, which resulted in the death of Smaug and the finding of the One Ring by Bilbo Baggins.

In the night between the 29 and the 30 September, T.A. 3018, Frodo Baggins met Strider at the largest inn in Bree, The Prancing Pony, owned by Barliman Butterbur. The inn was raided by servants of the Ringwraiths, forcing the retreat of Frodo and his companions.

Bree was raided by ruffians during the War of the Ring, leaving several Men and Hobbits dead. When Frodo and his companions returned in 28 October, T.A. 3019, returned to Bree, it seemed like most of the worst had passed. Barliman Butterbur explained to the Hobbits that none of the Bree-landers ever realized how much the Rangers of the North had done for them, but after they all left (to fight in the War of the Ring in the south) all sorts of ruffians and highwaymen and wolves had encroached on the land. The Bree-landers had survived by throwing up some hasty defenses and posting watchmen, but trade had dropped off to almost nothing as they barricaded themselves within their town walls. The Hobbits assured Butterbur that Aragorn II, known to him as his former customer "Strider", had now been crowned King and would soon venture north to restore order.

Presumably, Bree was re-absorbed into the revived Arnor and Reunited Kingdom of Aragorn, with increased trade allowing Bree to become more prosperous than in generations.

The name Bree means "hill" in Brythonic, a Celtic language, referring to the fact that the village of Bree and the surrounding Bree-lands were centered around a large hill. According to Tom Shippey, Tolkien was inspired by the actual town of Brill. 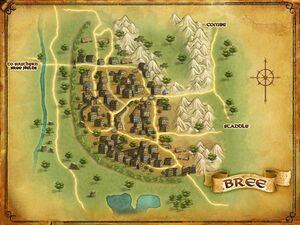 Map of Bree in The Lord of the Rings Online.

With the absence of Tom Bombadil and the Barrow-downs in most adaptations, the distance between Bree and the Shire seems shorter than it really was.

After leaving the Old Forest, the Hobbits appear in the Prancing Pony without delay or introduction. The rooms were raided by Ringwraiths rather than servants of them.

Here too, Bombadil and the Barrow-downs were omitted. After taking a short walk through Bree, the hobbits enter the Pony. Merry goes out for a walk, and is found by Bob the ostler. Once again, it is the Ringwraiths rather than servants of them who raid the Pony.

Frodo and his companions arrive at Bree almost immediately after the scene in which they leave the Shire. All are present in Strider's room when the Ringwraiths crash the gate, trample the gatekeeper, and raid the Prancing Pony.

The role of Bree is greatly expanded, due to the interactiveness of the medium. It is the place where the Hobbits meet Strider, and the player shifts perspective. Strider searches the streets of Bree for Merry and materials to make decoys for (once again) the Ringwraiths to slash, while the streets are crowded with robbers and wolves.

Bree is one of the major cities in the north, located in Bree-land. It faces threats from several fronts: Sharkey's brigands have already began making their way into Bree-land, the Barrow-downs are stirring following the passage of the Nazgûl and a small band of Orcs has made their way from the North Downs. The citizens of Bree know more of the bigger world than Shire dwellers, but are still oblivious to the dangers they could face. The town's mayor and the watchers don't trust the Rangers of the North, insisting they can manage their own affairs. Later, during the winter of T.A. 3019, Bree is overrun by Sharkey's Brigands and Half-orcs and has to be liberated by Free Peoples - an event references as "Thievery and Mischief" by Barliman Butterbur later.

Bree in The Lord of the Rings: War in the North.

Eradan, Andriel and Farin visit Bree in the beginning of the game, just a few days before Frodo reached the town. They meet with Aragorn in the Prancing Pony.[4]
Bree is protected by a dike and hedge and can be entered through two of its gates.[5] The most important structures in Bree are the Prancing Pony, Elmund Brushwood's smithy and Adalgar Oldbank's shop. Several characters appear in Bree: Otto Aster, Harley Bramble, Elmund Brushwood, Barliman Butterbur, Grof, Tedder Hedgerow, Adalgar Oldbank and a Southerner, as well as several unnamed Bree-landers.[4]

The opening scene takes place in Bree - once again featuring a cameo from Peter Jackson eating a carrot (see Albert Dreary) - where Gandalf and Thorin meet in the Prancing Pony. Gandalf tells Thorin of his meeting with Thráin, his worries about the dragon, and his wish to see Thorin retake the Lonely Mountain. Gandalf convinces Thorin that they need a burglar to retrieve the Arkenstone in order to summons the "Seven Armies" of the Dwarves.