Eradan is one of the three main characters of The Lord of the Rings: War in the North. He is a Dúnadan and was born before T.A. 2988 in the Angle. He was both a skilled swordsman and archer, and a great tracker.[1] He is voiced by Nolan North.[2]

The ancestors of Eradan were members of a noble family from Númenor, who served Elendil. After the Downfall of Númenor they went in exile to Middle-earth and lived in Arnor, where they served the heirs of Elendil. After the fall of that kingdom they continued to serve the Chieftains of the Dúnedain. 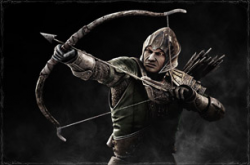 Eradan spend his youth in a small Dúnedain settlement in the Angle, while his father, Baranor, served Aragorn as an Ranger. While Baranor and a company of Dúnedain patrolled the Misty Mountains he didn't return. After the loss of his father, Eradan was fostered by his uncle, Dunhir.

After he was grown up he started his training to be a Ranger. After only two years he completed his training and started to fight the Orcs of the Misty Mountains and Trolls who roamed the east of Eriador. Eradan gained a high reputation as swordsman and archer, and his skills as outdoorsman and tracker were exceptional high.

When Aragorn doubled the defenses of the Shire Eradan served as one of the guards of Sarn Ford for many years under the command of Halbarad. In T.A. 3016 Aragorn became more active in the Shire's defense. In this time Eradan impressed Aragorn with his skills and bravery. Eradan accompenied Aragorn on many of his travels, on which Aragorn taught him even more about tracking.[1] In T.A. 3018 he met Farin and Andriel as they joined the guards of the Sarn Ford.[3] 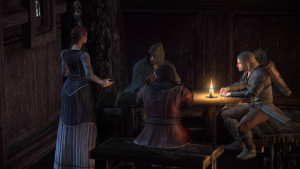 Andriel, Eradan and Farin meet Aragorn in the Prancing Pony.

When the Nazgûl attacked the Sarn Ford all three fought under the command of Halbarad in an attempt to prevent them entering the Shire. They were defeated and most of the rangers were killed. After the attack, Eradan, Andriel and Farin saw and overheard a meeting between the Witch-king and Agandaûr. Agandaûr told the Witch-king he had assembled an army of Orcs and Goblins in Fornost.

Halbarad sent the three to Bree, where they meet with Aragorn in the Prancing Pony. They tell Aragorn what happened, who sends them to Fornost, where they have to stop Agandaûr's army before it attacks Bree.[4]

After arriving in Fornost they are attacked by several groups of Orcs and Goblins and find a chained eagle. After Eradan and his companions helped him to escape, he introduces himself as Beleram and explains how he has been captured.[5] In regards of his rescue, Beleram decides to help them stop Agandaûr.[6]

In the inner wards of Fornost the companions meet with Elladan and Elrohir, who've been sent by their father to scout Fornost. Andriel introduces Eradan and Farin to Elladan and Elrohir. After finding out they're appointed to deal with the same task, the two groups decide to work together. Firstly Elladan and Elrohir lead Eradan and his friends to the citadel, but latter on they take seperate roads.[7] But meet again - after surviving several ambushes - at the gate of the citadel. The gate of the citadel has been protected by Agandaûr with magic. As the sons of Elrond use all their power and concentration to remove the magical protection, Eradan, Andriel, Farin and Beleram protect them against an attack of Orcs and a Troll.[8]

Inside the Citadel tower the group overhear a conservation between Agandaûr and Tharzog, who informs the earlier about intruders. Here, Eradan, Andriel and Farin are again seperated from the sons of Elrond. The earlier fight and kill Tharzog and his guard. After which they proceed to the top of the tower, where they find Agandaûr fighting the sons of Elrond. Agandaûr - seeing he is outnumbered - flees on a Fell Beast. Although Beleram chases him, he has to give up after Agandaûr creates a thunderstorm.[9]

One of his most unique skills is envision, which allows him to move undetected behind enemies and attack them in the flank. He fights with both a bow and a sword, and is good in tracking enemies.[10]

Although Eradan is only his thirties he looks older, because of his life in the wilderness.[1] The player is able to change and customize the look of Eradan.