Farin is one of the three main characters of The Lord of the Rings: War in the North. Farin is a Dwarven champion of Erebor.[1]

Farin's family originally lived in Erebor. But after the attack of the Dragon Smaug they went in exile to the Iron Hills, where Farin was born.

News of the return of Thorin to Erebor reached the Iron Hills when Farin was still very young. Because there was a great need for soldiers, Farin marched in the army of Dáin Ironfoot to Erebor. There he fought in the Battle of the Five Armies, where he proved to be a very strong warrior. For this reason Dáin made him a member of his personal guard.[1] 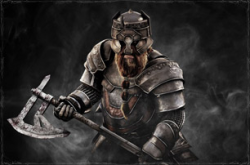 After the battle Erebor was reclaimed by the Dwarves, and Dáin was crowned as King under the Mountain. Farin served him in Erebor, and fought together with the men of Dale against the Orcs and Easterlings. Somewhere after T.A. 3001 Bilbo Baggins visited Erebor to meet with his old friends. In this time Farin met Bilbo, and he was very impressed of him.

When a messenger of Sauron came to Erebor in T.A. 3018 and asked information about "Baggins" and "the Shire", Farin was very worried. He thought that it was the task of his people to protect Bilbo Baggins and the Shire, and therefore he did swore an oath that he would travel to that country and protect it. He searched for other companions, but none wanted to travel with him as Erebor was threatened by enemies. Therefore, he went alone after Dáin granted him permission to go.[1]

Farin arrived at the borders of the Shire and protected one of its access roads. He questioned travellers, and sent those who he didn't trust away. The Rangers heard of Farin, and Halbarad tried to resolve this mystery. Halbarad disguised himself as a traveller and gained Farin's confidence, who told him about his mission. As Halbarad was convinced that Farin's intentions were good, he asked him to join the Rangers in their guard.[1] 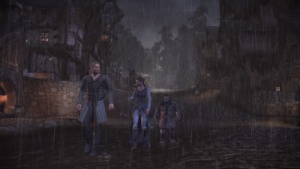 Farin joined the Rangers at Sarn Ford, and became a friend of Eradan, Kilaran and Luin. Just shortly before the Nazgûl attacked Sarn's Ford, he met Andriel, who was surprised to see a Dwarf among the Rangers.[2]

The next morning he assisted, together with Eradan and Andriel, the Rangers while they were attacked by the Nazgûl. They were defeated, and many of the Rangers were slain. However, shortly after the attack the Witch-king met with Agandaûr. Agandaûr tells the Witch-king that he had summoned the Orcs of the Misty Mountains and assembled an army in Fornost. The Witch-king send him back to Fornost, to attack immediately.[3]

Halbarad sent Eradan, Andriel and Farin to Bree, to warn Aragorn about this news. The three companions meet him in Prancing Pony, and tell him what happened at Sarn's Ford. Aragorn immediately sends them Fornost, to stop Agandaûr before he attacks.[3]

In Fornost Farin and his companions, Eradan and Andriel, find a chained Eagle, captured by Orcs and Goblins. After killing his jailers, he introduces himself as Beleram, one of the Eagles of the Misty Mountains. While gathering news for his lord - Gwaihir - he was taken out of the air by siege engines and sorcerers. Farin and his companions make a plan with Beleram to destroy the siege weapons, so Beleram can safely fly over Fornost.[4] On the top of Fornost's battlements Farin pushes two siege weapons from the battlements while Beleram attracts the attention of the Orcs and Goblins. The plan succeeds. Furthermore, they kill an Orc sorcerer and retrieve an unreadable scroll.[5]

Andriel, Elladan, Elrohir, Eradan and Farin at the gate of the Citadel.

Further on, in the inner wards, Farin, Eradan and Andriel meet the sons of Elrond, who were sent by their father to scout Fornost. Andriel, who was trained by them, introduces her companions to them and explains their mission. They team up to kill Agandaûr.[6] Although seperating, both groups (with the help of Beleram) eventually reach the citadel of Fornost.[7] The citadel gate, however, is protected by Magic, and Elladan and Elrohir need all their power and concentration to undo the magical protection. At the same time, a band of Orcs arrives which is successfully stopped by Farin and his companions.[8]

Inside the Citadel tower the group overhears a conservation between Agandaûr and Tharzog, the leader of the Orcs of Mount Gram. The latter informs Agandaûr that intruders have been spotted. Agandaûr commands the Orc to find and kill the intruders immediately, after which Agandaûr leaves. The group attempts to follow him, but is separated again when Tharzog notices them and closes the gates. Farin, Eradan and Andriel kill Tharzog and his guard.[9]

On the top of the Citadel tower they find Agandaûr fighting Elladan and Elrohir. Although he had the upper hand, he is not strong enough to fight Farin, Andriel, Eradan and the twins at the same time. He flees on the back of a Fell Beast. Although Beleram chases Agandaûr, the sorcerer summons a thunderstorm. After being hit by a lightning, Beleram returns to the tower. They discuss the events concerning Agandaûr and Fornost, and decide to part: Beleram returns to Gwaihir, the sons of Elrond return to their father in Rivendell and Farin and his companions travel to Sarn Ford to inform Halbarad.[9]

He uses an axe for melee-combat and a crossbow for ranged combat.[10] His strength lies in fighting enemies in close quarters.[11]