"Halbarad Dúnadan, Ranger of the North I am. We seek one Aragorn, son of Arathorn, and we heard he was in Rohan."
― Halbarad in "The Passing of the Grey Company"

Halbarad was a Ranger of Eriador.

Halbarad spent his early life watching the borders of the Shire.

During the War of the Ring, Halbarad was sent to the aid of his Chieftain Aragorn. From Eriador, he led a thirty-man strong group of Rangers, calling themselves the Grey Company. With them rode Elladan and Elrohir, the sons of Elrond. In the night between the 5th and the 6th of March, the Company met Aragorn at Dol Baran. Halbarad gave his kinsman a standard, which was a gift from Arwen, and a message, summoning him to take the Paths of the Dead.[2]

The Grey Company, now with Gimli and Legolas part of Aragorn's comitatus, passed through the Paths of the Dead, to the Stone of Erech, over Tarlang's Neck, and on to Pelargir. He captained a Corsair ship and they sailed toward Harlond.[3]

On March 15 they arrived on the Pelennor Fields and fought in the battle. Halbarad unfurled the standard, and it showed the White Tree of Gondor and the signs of Elendil. He was killed in this battle, and would never return to the North.[4]

Though Halbarad is not glossed, it is suggested by David Salo to possibly be a Sindarin name comprised of the element barad ("tower, great towering building") and the Noldorin hall ("exalted, high").[5] 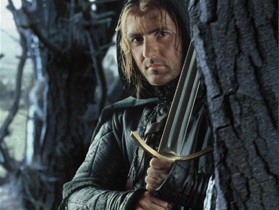 Halbarad in The Lord of the Rings Trading Card Game

Halbarad is played by an uncredited actor.

Halbarad had a role similar to his role in the book. He was voiced by Martyn Read.

Halbarad, a sage/diplomat hero character, is illustrated by Quinton Hoover.

Halbarad is portrayed by Warren Mahy. 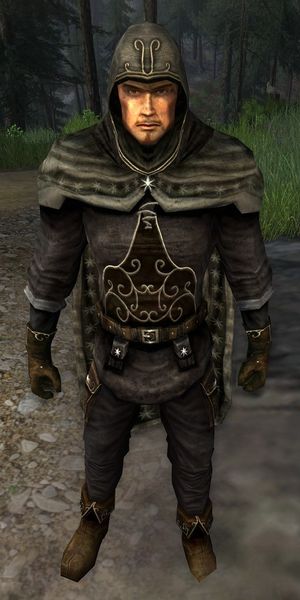 Halbarad in The Lord of the Rings Online

Halbarad is in command of Esteldin, a hidden Dúnedain city in the North Downs. After receiving orders from Elrond to seek out Aragorn in Rohan, Halbarad gathered a large company of Rangers to head south. After suffering short delays in Enedwaith, Halbarad managed to form an alliance of sorts with the Falcon Clan in Dunland. However, Halbarad and his company were soon betrayed and imprisoned by the Falcon Clan. Some of the Rangers with Halbarad managed to escape and soon the Grey Company was free, at the cost of many lives. By the time they reached the borders of Rohan, only 30 of their number remained. At the Battle of the Pelennor Fields, Halbarad sacrifices himself to protect Aragorn from being killed by Gothmog.

Halbarad appears at the beginning of the game at the Sarn Ford. Shortly after the Nazgûl attacked the Dúnedain who guarded the Shire, he sends Eradan, Andriel and Farin to Bree to warn Aragorn.[6]