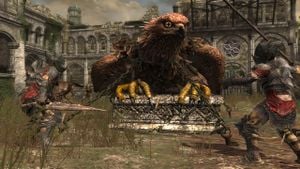 Beleram - captured by Orcs and Goblins - in Fornost.

As soon as Eradan, Andriel and Farin enter the ruins of Fornost they are attacked by a band of Orcs and Goblins. After cleaning the main gate, they end up in the pits under Fornost. There they hear an animal screaming. After finding their way out of the pits, they find the source of the noise - a giant Eagle. The three heroes unchain the Eagle and kill it's jailers. The Eagle introduces himself as Beleram, a servant of Gwaihir who gathered news but was taken out of the air by siege engines and sorcerers. Together the Eagle and the three heroes make a plan: while Beleram would attract the enemy's attention, Eradan, Andriel and Farin would make their way up to the battlements to destroy the siege weapons.[9] The plan works out succesful, as all siege weapons as well as two Orc sorcerers are destroyed.[10] The player, furthermore, obtains a scroll with unreadable text.[11]

Andriel introduces Eradan and Farin to Elladan and Elrohir, and informs them about their task. They collaborate in this task, but instead of just stopping the army to attack they decide to kill Agandaûr. The sons of Elrond guide the player to the citadel. They separate, however, after defeating another giant crossbow. Eventually, they are locked on a bridge between two gates. After surviving an ambush, the sons of Elrond appear again and open the gate.[13] After defeating another more ambushed, they arrive at the gate of the citadel. Which is protected by a magic spell, to stop intruders. While the sons of Elrond undo the magic, the player defends them against an attacking force of Orcs, Goblins and a Troll. As Eradan, Andriel, Farin, Elrohir and Elladan enter the citadel, Beleram remains outside to protect them against reinforcements.[14]

Inside, they overhear a conversation between Agandaûr and Tharzog, chieftain of the Orcs of Mount Gram. Tharzog tells Agandaûr that there are intruders in Fornost, after which Agandaûr angrily commands him to find and kill them immediately. After Agandaûr leaves, the player and the sons of Elrond go onward in the tower. Tharzog, however, notices them and as a gate is closed, the player is cut off from the sons of Elrond. Tharzog and his guard attack Eradan, Andriel and Farin, but the latter manage to kill him.[15]

In Rivendell the fellowship meets several members of the Council of Elrond,[16] scout the land around Rivendell[17] and fight Orcs with Elladan and Elrohir.

The collector's edition of The Lord of the Rings: War in the North.