Azog was an Orc-chieftain of Moria, who started the War of the Dwarves and Orcs when he slew Thrór. He was himself slain by Dáin II Ironfoot in the Battle of Azanulbizar, and was succeeded by his son Bolg.[1][2][3]

Little is known of Azog's origins, but he was the chief of the Orcs of Moria, and apparently the most important Orc of the northern lands. The average lifespan of an Orc is unknown, but it is conceivable that he was one of those sent to Moria by Sauron in about T.A. 2480. He had one son that we know of, Bolg, who succeeded him after his death. 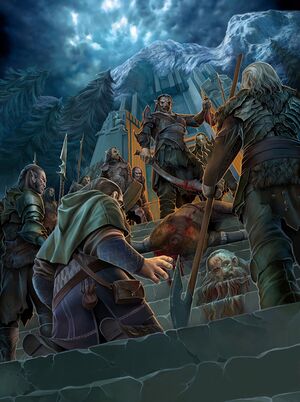 Azog entered history in the year T.A. 2790 due to King Thrór's desire to revisit and perhaps refound the lost realm of Khazad-dûm, in whose mighty ruins Azog dwelt. He entered the Great Gates but Azog and his orcs captured and slew him, and branded his hewn head with his own name, "AZOG". He flung the head at Nár who waited outside, then a money purse containing "few coins of little worth", warning that he would tolerate no future Dwarf beggars entering his domain at Moria.

When news of this reached Thrór's heir Thráin, he was greatly angered, and mustered a force of Dwarves to seek revenge on Azog. So began the War of the Dwarves and Orcs: the Dwarves hunted Azog, and many battles were fought beneath the earth. After nine years of war, the climactic Battle of Azanulbizar was fought before the gates of Moria itself.

King Thráin II and his son Thorin were in that battle, near the end of which, Azog emerged from the inner gate with his guards, Náin was exhausted and half blind with rage. He tried to swing as hard as he could, but Azog darted aside and Náin missed, splintering his mattocks on the ground. The orc kicked him in the leg when he dodged the Dwarf's blow, making him stumble, at which point Azog attempted to thrust and behead him, succeeding only in breaking Náin's neck because of the strong mail he was wearing. At this point, Azog noticed his retreating forces and retreated back inside. As he did, Dain II chased him up the steps, beheading him Azog's head was impaled on a spike, with the same coin-filled purse stuffed in his mouth that he had flung at Nár after he killed Thrór nine years before.

Azog's underground dominions in the north, though greatly reduced in the War, fell to his son Bolg, who held them for almost 150 years until he too met his end at the Battle of Five Armies in T.A. 2941.

The meaning and origin of the name Azog is unknown. It is most likely a name in the Black Speech, though Mágol may also be a possibility.[4]

Andreas Moehn has noted an apparent but tentative similarity with Mannish, in the Adunaic word zagar meaning "sword", in which case Azog might refer to "warrior" or anything similar.[5]

Azog is played by Manu Bennett via motion-capture and CG (though he was originally intended to be played by Conan Stevens in a practical costume and makeup[6]). He is a white-skinned Orc, known as the Pale Orc or Azog the Defiler. According to Balin, he is from Gundabad. In the films, the Battle of Azanulbizar appears in a flashback. Thrór is still alive at this time and is beheaded by Azog during the battle. Thorin fights with Azog and cuts off his left forearm, and the Pale Orc is dragged off by a few fellow Orcs. Thorin believes Azog to have died from his wounds, but, unlike in the book, he actually survived the battle and serves as Thorin's nemesis. The Pale Orc is also portrayed as a committed and trusted general of the Necromancer - whereas in the source material his allegiance to the Dark Lord can only be assumed as a likelihood - and he is therefore tasked by his master first with hindering Oakenshield's quest and later with conquering the Lonely Mountain.

In the films, Azog speaks exclusively in Orkish, whereas his literary counterpart was also known for using the Common Speech. He rides a gigantic white warg. He also lacks the iron-clad head he featured in the books.

Azog leads a pack of Orcs on Wargs in hunting down Thorin and Company to wipe out the Line of Durin and to take his revenge on Thorin for his wound - even putting out a bounty on Thorin's head. In the film, it is his pack (not the Orcs of Goblin-town) that catch up to the Company on the other side of the Misty Mountains; after a brief fight with Thorin, he loses them when they are rescued by the Eagles.

While still in pursuit of Thorin and Company as they come down from the Carrock and make their way to Beorn's house, he is summoned to Dol Guldur by the Necromancer himself. Though annoyed that yet again he is unable to track down Oakenshield, Azog submits to his master and agrees to lead his armies to Erebor, sending his son Bolg to pursue the Company in his stead. He later leads an unsuccessful attack on Gandalf when the Wizard enters the fortress prior to the army's departure.

In this movie, Azog's appearance is changed, as he now wears plate armor, and he replaced his claw arm with one that looks similar to a sword. Azog is first seen marching on Erebor. When Bolg tells him of the Elven Army, he orders him to Gundabad for more troops. From Ravenhill, Azog commands the Orcs in the Battle of Five Armies. Thorin, Fíli, Kíli and Dwalin go to kill Azog, in order to leave the Orcs leaderless. But Azog captures Fíli and kills him in front of Thorin. Azog finally battles Thorin on a frozen lake and is knocked underwater. However, he breaks through the ice and stabs Thorin, mortally wounding him. Despite this, the Dwarf leader manages to stab Azog through the chest with Orcrist - finally killing the Pale Orc - shortly before succumbing to his own wounds.

Azog appears in an extended flashback depicting the beginning and the end of the War of the Dwarves and Orcs. Azog's youngest son "Komog" is slain in the halls of Gundabad, while his eldest son "Urro" is killed by Thorin during the Battle of Azanulbizar in the same engagement that earns him the name "Oakenshield". Bolg survives as his only heir by escaping into Moria shortly before Azog is killed by Dáin.

In the present day, Azog's descendants continue to plague Durin's Folk. Bolg's son "Mazog", Lord of Moria, is the major antagonist of the Mines of Moria and Siege of Mirkwood expansions. Bolg's other son "Gorgar the Ruthless", Lord of Gundabad, is the chief antagonist of the War of Three Peaks expansion.