Durin's Folk, also known as the Longbeards (Sigin-tarâg in Khuzdul), were one of the seven kindreds of Dwarves whose leaders were from the House of Durin. Their first king was named Durin, who was one of the seven Fathers of the Dwarves.[2] 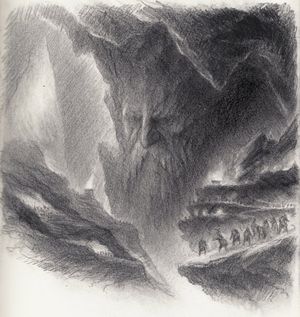 When Men first migrated west into Rhovanion and Eriador, they encountered Durin's Folk. The Men looked at the Dwarves with awe and were eager to learn from them. [3]

After the War of Wrath and the breaking of Thangorodrim, the ancient cities of Nogrod and Belegost in the Blue Mountains had been ruined. In the Second Age, about the year 40,[5] many Dwarves who lived in these cities left the destruction behind and came to Khazad-dûm, increasing its wealth and power.[2] The Longbeards controlled Erebor, Ered Mithrin, Ered Engrin, and the eastern side of the Misty Mountains up to Lorien.[4]

Also in that time, Morgoth's Orcs, now leaderless and reckless, but still numerous, armed and cruel, returned to the East and started harassing the Dwarven lands again, as well as the more numerous Men who settled between the Grey Mountains and Mirkwood. In the battles that followed Dwarves and Men were threatened. The Dwarves, outnumbered, were glad to make alliance with Men. Men chiefly provided food in exchange for Dwarven work in building, road-construction, mining, and the crafting of tools and weapons.[6] At first, this system benefited the Dwarves, as the services they provided to Men required less effort than those offered in exchange, till Men became wiser and developed skills of their own. With less work to provide food by their own, the Dwarves were free to continue with pursuing their labour and refine their skills.[3]

With better weapons and protection, and riding skills of their own, enabling them to function as mounted scouts and archers, Men could watch and defend the plains and vales where no Orc could then venture without danger. Thus the Alliance of Dwarves and Men was formed, resulting to mutual respect and also warm friendship.[3] During this period the Longbeards adopted the speech of Men, keeping their own language to themselves.[7][3]

In 750, the Noldor established a new realm in Eregion. Being close to Khazad-dûm they established a friendship with Durin's Folk unlike any before between Elves and Dwarves. Both peoples were enriched, and the Elves (seduced by Sauron) forged the Rings of Power (the forging began about 1500 and one of these was given to Durin III, according to the dwarves by Celebrimbor himself, in Khazad-dûm[2]). In 1697, Eregion was destroyed by Sauron, and the gates of Khazad-dûm were shut[5] and remained so throughout the Dark Years of Sauron's dominion. Durin's Folk stayed enclosed in Khazad-dûm, which was unassailable from without; its wealth remained unravished, but communication between the Dwarves of Khazad-dûm and the Dwarves of the Iron Hills was cut off.[8]

During the reign of Durin VI in the Third Age, the Dwarves of Khazad-dûm delved deeper and deeper for mithril, which had become increasingly harder to find. In 1980 however, they accidentally awoke a hidden Balrog that had fled from the First Age and killed King Durin VI. Finally in 1981 his son Náin I was also killed and all the people of Khazad-dûm were either killed or fled far away.[2]

Most of Durin's Folk escaped to the north where in 1999[10] Thráin I established a new capital within Erebor, becoming King under the Mountain. By the Watchful Peace most Longbeards gathered to the Grey Mountains and King Thorin I left Erebor in 2210[10] and travelled further north to settle there also. For a time they prospered there for the mountains were rich.[2]

Unfortunately, there were dragons in the wastes north of the Grey Mountains, and in 2570 they began making war against the Longbeards. The conflict came to a climax in 2589 when King Dáin I[10] and his second son Frór were killed by a great cold-drake outside his hall.[2] Soon after, most of Durin's Folk left the Ered Mithrin with Grór, Dáin's third son, leading many followers to the Iron Hills in 2590.[10]

In the same year, Dáin's first son and heir, Thrór, with his uncle Borin and the remainder of the departing Longbeards, returned to Erebor. There they prospered, winning the friendship of all Men nearby, and trafficking in ore with their kin in the Iron Hills.[2] News of the wealth of Erebor spread and reached the dragons, and in 2770 Smaug suddenly descended upon the Mountain, and sacked it.[10] Although many Dwarves were killed, many escaped as well. Among them were King Thrór and his family who headed south into a long homeless wandering while most of the surviving Longbeards headed east to the Iron Hills.[2] 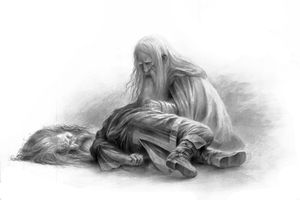 The followers of Thrór eventually settled in Dunland[2] where in 2790 Thrór left "to see what I can find."[10] With a companion, Nár, he came to the east gate of Khazad-dûm and entered as a returning heir. For days Nár waited in hiding outside until Thrór’s body was tossed from the gates by the Orc-chieftain Azog, who told Nár to go warn his kin never to return to Moria. Nár went back to Thráin, Thrór's son to report what had happened. Now King and filled with anger, Thráin II sent word to all the houses of the Dwarves to prepare for war.[2]

By 2793 the Dwarves had mustered a great host. Durin's Folk and large forces from the other Houses were ready to launch a war of vengeance.[10] For six years, From Gundabad to the Gladden, they sacked and assaulted every Orc dwelling they could find. Defeating the Orcs through strength, matchless weapons, and burning anger.[2]

At last on a dark winter day in 2799 the Dwarf-host came to Azanulbizar[10] and found a great host of Orcs awaiting them. Undeterred, the Dwarves, led by Thráin II, made their assault, beginning the Battle of Azanulbizar. This final battle too the Dwarves won, but at great cost. In the end, Azog was beheaded and Thrór was avenged, but the Dwarves could not take Khazad-dûm, for within still dwelt Durin's Bane.

With the war over, the Dwarves dispersed. Dáin Ironfoot led his contingent of Longbeards back to the Iron Hills. Thráin II, with Thorin, Balin, Glóin, and others of their following returned to Dunland. Soon though they uprooted and wandered in Eriador until they established themselves in the northern Ered Luin beyond the Lune. There they prospered and their numbers slowly grew.[2]

Thráin II decided to return to Erebor in 2841 but as he travelled, he and his companions were pursued by Sauron's servants. One day in 2845 Thráin was captured and imprisoned in Dol Guldur. Eventually, in 2850, Gandalf found him and received the key to Erebor, but the last of the Seven Rings had been taken and Gandalf was unable to rescue the Dwarf.[10]

Durin's Folk grew strong in Erebor until during the War of the Ring their realm and that of the Kingdom of Dale were attacked by Sauron's northern forces. In the Battle of Dale in 3019 King Dáin II fell and thereafter the Mountain was besieged. Upon the news of Sauron's downfall, however, the besieged routed the army of Sauron and Dáin's son, Thorin Stonehelm became the King under the Mountain as Thorin III.[11]

After the fall of Sauron, Gimli, the son of Glóin, brought some of Durin's Folk from Erebor south to Aglarond and there established a new Dwarf-realm. Gimli served as the Lord of the Glittering Caves.[2]

Eventually, a descendant of Thorin III Stonehelm, Durin VII, led Durin's folk from Erebor back to Khazad-dûm and restored the ancient kingdom sometime after Fo.A. 171. There they remained "until the world grew old and the Dwarves failed and the days of Durin's race were ended."[12]

In the Lost Tales, the Longbeards (the Indrafangs) were living in Belegost.[13] They had part in the destruction of the realm of Tinwelint.[14]

Sigin-tarâg is Khuzdul for "Longbeards", from sigin ("long") and tarâg ("beards"). The name was translated as Andafangar in Quenya, and Anfangrim in Sindarin.[15]

Historically, the term "Longbeards" is the supposed original name of the Lombards. The Lombards became bankers and the Middle English "Lombard" means banker, money lender. This is expressed by Thorin: "... and the poorest of us had money to spent and to lend, ..."[16]