Durin IV was a King of Durin's folk who ruled the great Dwarven city of Khazad-dûm, and the fourth king to have the name Durin. Like his father he bore a Ring of Power.[1]

Like all Durins after Durin I, he was given the name of the first of the Seven Fathers of the Dwarves because he greatly resembled him in both appearance and manner. Indeed it was believed among the Dwarves that he was the reincarnation of Durin I, though whether this is possible is unclear.[1]

One account states that the name Durin was a word for "king" in the language of the Men of the North in the early Second Age.[2]

Another account states that Durinn is one of the Dwarfs in the Dvergatal. The name means "Sleepy".[3] 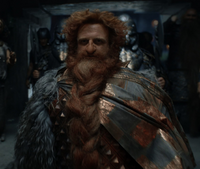 Prince Durin IV in The Lord of the Rings: The Rings of Power

Prince Durin IV is portrayed by Owain Arthur as one of the central characters of the series.[4] In the series, he is portrayed as the prince of Khazad-dûm and son of Durin III. In addition, his wife is named Disa. He first appears on it's series second episode at the city of Khazad-dûm where he welcomes Elrond.

Durin IV was the reigning King of the Longbeards during the War of the Last Alliance. He and the "Thíuda", the Northmen of the Second Age, were tasked with defeating a mighty horde of Easterlings. They were defeated and retreated to rejoin the rest of the Alliance on the besieged plain of Gorgoroth.