After a great Cold-drake killed both his father and brother Frór, the remaining brothers Thrór and Grór led their people away from the Grey Mountains. As Dáin's heir Thrór led many Dwarves back to Lonely Mountain in T.A. 2590[2], where he became King under the Mountain, a title held earlier by his ancestor, Thorin I. Grór continued east with a great following of Durin's folk to the Iron Hills, where he founded his own realm.[1]

At Erebor, Thrór and his people re-established the Kingdom under the Mountain and became very prosperous. Thrór brought the Arkenstone back to Erebor[1] and the hall of feasting and council, the Great Chamber of Thrór,[3] was named after him.

Thrór and his people gained the friendship of the Northmen who lived along the river Celduin. These people later founded the town of Dale and had much trade of goods, beautiful trinkets, and weapons with the Dwarves. The Dwarves of Erebor also had much traffic of ores with their kinsman in the Iron Hills and the region had peace and prosperity for many years.

But in 2770[2] their prosperity ended. The Dragon Smaug heard of the wealth of Thrór and his people. He flew south from the Ered Mithrin and sacked the Lonely Mountain, killing many Dwarves. From the destruction many escaped, the last of them being Thrór and his son Thráin from the hidden Back Door. With a small company of kin and faithful followers they made a great wandering southward, until they reached the hills of Dunland.[1]

On a Mid-year's Day under a broad crescent moon, Thrór created his map of the Lonely Mountain and the Desolation of the Dragon. In addition to the readily visible features on the map, Thrór added the details about the hidden Back Door into the Mountain, written in Moon-letters for secrecy.[4]

[edit] Dunland, and the journey to Moria

In Dunland, his people tried to make a living, but twenty years[2] after the Sack of Erebor, despondent and homeless, Thrór left his people and went north with a single companion, Nár. Before leaving, Thrór gave his son Thráin II his Ring of Power, along with the map and key to the Lonely Mountain. Thrór wished to see the fabled city of his ancestors, Khazad-dûm.

Eventually they made it over the Redhorn Pass down into Azanulbizar, the Dimrill Dale. Coming to the East-gate of Moria Thrór found it open. Nár begged him to beware, but ignoring his companion Thrór walked through the gates as the heir who had returned. But he did not come back.[1]

Nár hid nearby for many days until he saw Thrór's body flung down the steps; his severed head lay face downward on the ground. As he knelt there, Nar saw branded across his forehead in Dwarvish runes the name AZOG. This Orc then threw a small purse of coins at him, calling him a beggar. Nár fled weeping down the Silverlode, while Orcs emerged and hacked Thrór's body into pieces and fed them to the crows.[1]

When Nár told Thráin what had happened, he declared war on the Orcs and called all the Seven Houses of the Dwarves together for vengeance. Nine years later in T.A. 2799[2] at the Battle of Azanulbizar, the climax of the War of the Dwarves and Orcs, the death of Thrór was avenged when Azog was beheaded by Dáin Ironfoot. Thráin took Azog's severed head, shoved the purse of coins into his mouth and then set it on a stake.[1]

Jim Allan has suggested that the name Thrór derives from Þrór, a dwarf from the Dvergatal. According to Allan, Þrór means "boar", deriving from a root meaning "to expand" (linking the meaning to Thrór's expanding of the "diggings and wealth of the Lonely Mountain").[5] 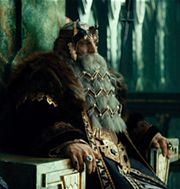 Thrór in The Hobbit: An Unexpected Journey

A statue of Thrór stands in the great hall of Erebor.

Thrór is played by Jeffrey Thomas.[6] Contrary to Tolkien's writings, Thrór is shown as the ruling king at the time of the discovery of the Arkenstone instead of his ancestor Thráin I. With this, the film portrays him as believing its discovery as a sign of his divine right to the throne.

The film also condenses the events after the Sack of Erebor to show Thrór choosing to try to retake Moria as the home of his people, but in the process being beheaded in the Battle of Azanulbizar by Azog.