Not at Home is the 13th chapter of The Hobbit.

The dwarves sat in terror for a time and feared they would be trapped inside the mountain. Not knowing if Smaug was waiting at the bottom, Bilbo and Thorin led the Company down the tunnel, but Bilbo fell face first into the dragon hoard. Finding Smaug was not at home, he got up, took a light from the dwarves, and climbed the mound of treasure. There, he found the Arkenstone, fairest of all dwarven gems. It sparkled of many colours in the light of his torch, and he was awestruck at its beauty. Drawn by it, he picked it up and put it into his pocket. He was so dazzled by it that he would have happily taken it as his fourteenth share of the treasure, but he had a feeling that his share was never meant to include it. Indeed, he perceived that trouble would come of it. 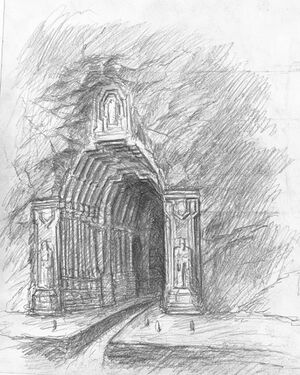 Bilbo moved through the hall, getting further away from the dwarves. He saw glimpses of the dwarven city in the darkness. But he was startled by bats flying past his face, and dropped his torch. In the darkness, he cried out for the dwarves. They moved into the hall and met him. Seeing the majesty of the treasure before them, they became emboldened, and began playing harps from the hoard and gathering gems. Thorin continued searching for the Arkenstone, but he kept the object of his search a secret from the rest of the company. He arrayed himself in dwarven mail, and appeared as one of the great dwarf-lords of old. Calling Bilbo to him, as the first payment for his job as burglar, he gave to him a lightweight shirt of silver mail: mithril. Bilbo took it gratefully and mused at it, but quickly tired of the rest of the hoard and urged Thorin to exit the mountain while Smaug was not there. The Company climbed stair after stair until they came to the Great Chamber of Thrór, in a state of decay. Moving through it, they arrived outdoors at last, to the Front Gate, with the River Running beside them, and Dale in front of them.

In the fresh air, Bilbo realised he was cold and hungry. It had been two nights and a day since Smaug smashed the hidden door, though Bilbo was unable to tell the passage of time inside the mountain. Realising they were not yet out of peril, for they did not know where the dragon was, they followed an old path known to Balin, until they reached a sheltered dell, where they rested a short while. There, they had cram and water for breakfast. Then they continued westwards until they came to the top of a ridge, with a wide view south, east, and west, and sheltered to the north. According to Balin, it was an old guardroom during the days of Dale, and a place where they could take some proper rest. But Dori remained fearful of Smaug. Some of the Company, including Bilbo, threw themselves down to sleep in the guardroom, but others discussed their plans and the potential whereabouts of the dragon. They noticed a large gathering of birds in the west, but did not understand the significance of this as night fell.