"That stone of all the treasure I name unto myself, and I will be avenged on anyone who finds it and withholds it."
― Thorin in The Hobbit, "A Thief in the Night" 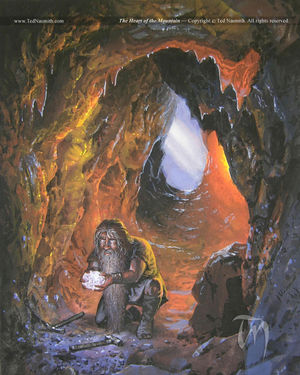 Heart of the Mountain by Ted Nasmith

Thráin's son Thorin I carried it away into the Grey Mountains where it remained for some generations, until in time King Thrór brought it back to the Great Hall of Thráin.[1] When the Dragon Smaug sacked Lonely Mountain, the Arkenstone was lost to the Dwarves of Durin's Folk — it lay among Smaug's booty in the halls of Erebor. 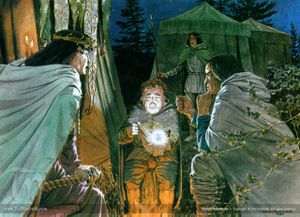 Many years later, when Thorin led a band of Dwarves to recover their ancient realm, their companion Bilbo Baggins discovered the Arkenstone, but kept it for himself. Thorin sought for it while exploring the treasure, and swore an oath to take revenge on anyone who knowingly kept it from him, but Bilbo stayed silent nonetheless.[2] Later, when the Lake-men and the Wood-elves came to demand a share of Smaug's treasure from Thorin, Bilbo was disturbed by Thorin's unwillingness to barter. Hoping to aid negotiations, he secretly entered the camp of the Men and Elves and delivered the Arkenstone to their leaders, Bard and Thranduil. The next day a twelfth share of the treasure was demanded from Thorin for the ransom of his people's heirloom.[3]

The Dwarves worked the stone into a multifaceted jewel. It shone with its own pale light, but when outer light fell upon the Arkenstone, it "...changed it into ten thousand sparks of white radiance shot with glints of the rainbow". It was a heavy gem, small enough for Bilbo Baggins to hold in one hand, yet not so small that he could close his own small hand around it.[2]

The Arkenstone is omitted. In the place of this subplot, Bilbo voices a desire to be taken prisoner as quickly as possible prior to the Battle of Five Armies, to which Thorin responds that these are the words of a coward.