They were Northmen and their ancestors were related to the Edain.[1] They traded with Erebor and Dale, and with the Woodland Realm of Mirkwood. Their life was affected with the arrival of the Dragon Smaug who destroyed both Erebor and Dale. Some of the Men of Dale who survived came to Esgaroth such as Girion's descendants. However as the years passed, Smaug was forgotten and children even doubted about his existence or the tales of older men who sometimes had seen him flying.[2][3]

In the autumn of T.A. 2941 the Lake-men welcomed warmly Thorin and Company who came to the town to speak to the Master. They saw the King under the Mountain returning. The Dwarves and Bilbo were hosted, rested and pampered before being sent with boats to the ruins of Dale to confront the dragon.[3] 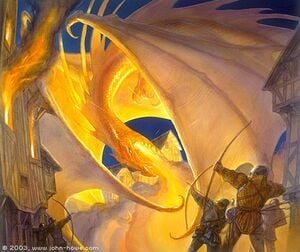 Some days later, Smaug came against Esgaroth believing that the Lake-men were behind a scheme against him, and attacked to show that he is the true King under the Mountain. Smaug was killed by Bard the Bowman, but the dragon fell on the town, destroying it. Having heard of the disaster, some Elves of Mirkwood came to offer any help that could be provided. The Lake-men were united under Bard, and, some days later, a united host of Men and Elves set forth towards Erebor, believing that the Dwarves had been among the first casualties of Smaug's wrath. To their surprise they found Thorin and Company quite alive, having fortified the Mountain, and themselves treated as foes.[2] Bard, claimed one twelfth of the treasure, one of the reasons being that the men of Esgaroth had helped the Dwarves on their journey and now their homes were burned and their stocks being destroyed by Smaug, whose anger was risen by the Dwarves. Therefore they demanded compensation and Bard intended to pay it from the part of the treasure he claimed.[4] 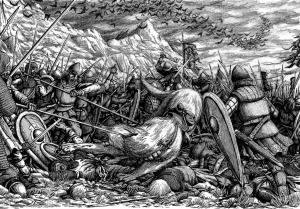 Battle of Five Armies: Men of Esgaroth by Joona Kujanen.

Thorin however were unwilling to cooperate, especially having the Elves camping below Erebor. He summoned reinforcements from the Dwarves of the Iron Hills under Dáin Ironfoot. The battle seemed inevitable, but Gandalf intervened, to warn them that Orcs and Wargs, their common foes, are also coming for Smaug's treasure. Then the Battle of Five Armies begun, and 200 or so Lake-men fought alongside the Dwarves. They were overwhelmed by the superior numbers of Orc warriors, but they were supported by Beorn and the Eagles.[5]

After defeating the Orcs and Wargs, the victors divided the treasure. Bard took Bilbo's fourteenth share of the gold and silver in return for the Arkenstone, whereupon he shared his reward with the Master of Lake-town.[6]

Eventually Esgaroth and Dale were rebuilt. Some of the Lake-men were relocated to the newly founded Kingdom of Dale and near the Lake during the War of the Ring.[7] 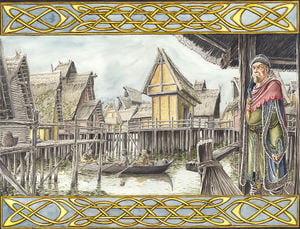 Henning Janssen - Master above the Lake

The town's prosperity was built on trade between the Men, Elves of Mirkwood and Dwarves of Erebor. It supplied food and drink to the Elves and the products of Erebor and Dale were funneled through it.[1]

The Master of Lake-town was the elected civic leader who under normal circumstances was chosen from among the old and wise.[3]

As a trading people, the Lake-men knew the Common Speech, Westron. However, amongst themselves they spoke an ancient form of it, Dalian, loosely related to but distinct from Rohanese (and other languages of the Northmen).