A Warm Welcome is the 10th chapter of The Hobbit.

Following the escape of the dwarves from the wood-elves, Bilbo listened to the talk of the raft-elves. He realized they were very fortunate to have escaped the way they had. He saw that the path that Beorn had told them to follow came to a "doubtful and little used end at the eastern edge of the forest." 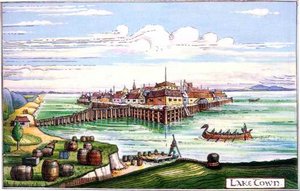 After a while they came to the Long Lake, and Bilbo marvelled at its size. They came to Lake-town; a small collection of huts and buildings built on stilts over the water. The ruins of a bigger town could be seen rotting away along the shores.

The first Dwarf to be unloaded was Thorin, who was barely alive, and Bilbo instructed him to "slap your arms and rub your legs." When Bilbo knocked on the barrels, only six dwarves are able to answer: Dwalin and Balin were the worst off; Bifur and Bofur were better off, but would not help; Fíli and Kíli had a better time of it, and had only a few bruises (Fíli said he hoped he never smelled apples again, as his barrels had been full of the smell); Bombur was asleep or unconsious; and Dori, Nori, Ori, Óin, and Glóin were barely alive.

In Lake-town Thorin requested to see the Master of Lake-town. He was feasting at the time and all the Dwarves joined him (they were famished with hunger since they had not eaten for several days). They got a warm welcoming, and Thorin, the grandson of Thrór, the king under the mountain, was treated as a hero. The Dwarves' feelings for Bilbo improved and they praised him. But unfortunately Bilbo had such a bad cold that his speeches at the banquet were limited to "Thag you very buch."

After two weeks at Lake-town, Thorin and Company decided to leave for the Lonely Mountain.