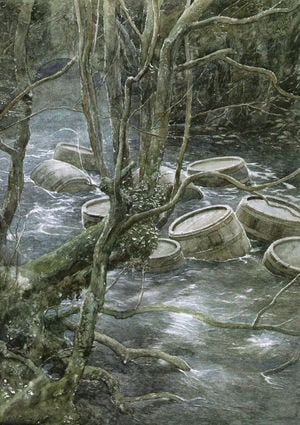 "Barrels out of Bond" by Alan Lee

The Forest River was a great river that flowed through northern Mirkwood. It began in the Grey Mountains far to the north and then flowed south-east, joined by the Enchanted River near Thranduil's caverns, until it met the River Running at Esgaroth in the Long Marshes.[1]

The Forest River was used by the Dwarves to escape from the Elvenking's Halls in barrels. The Elves, led by Legolas, gave chase, but Bolg and his orcs attacked them. As the Dwarves were not boxed in the barrels and merely used them to stay afloat, they could fight back against the orcs with whatever weapons they could find. Kíli was injured by a Morgul arrow when he tried to open a sluice gate in the river.