The Trollshaws were the upland woods, consisting at least partly of beech trees, that lay to the west of Rivendell between the Rivers Hoarwell and Loudwater.[1]

On the hills of the Trollshaws were shallow caves, such as the Trolls' Cave, and Mannish castles and towers.

The Trollshaws were within the borders of Arnor and later of the smaller realm of Rhudaur. The Men of Rhudaur built castles and towers on the top of some of its hills.[2]

They were the haunt of Trolls, especially after the fall of Arnor; Stone-trolls from "the mountains" came to the woodlands. This was the case of William who led Tom and Bert; having eaten a village and a half on their way, they complained about the scarcity of people in the area and instead had to make do with mutton. While they made their camp, they famously waylaid Bilbo and his companions who were on their Quest of Erebor. Thanks to the distractions of Gandalf, the Trolls were turned to stone by the Sun.[3] Years later, Frodo and his companions traversed the woodland and found the Trolls' petrified forms on the way to Rivendell.[4]

Shaw is an archaic word meaning "thicket, small wood, copse, or grove". The Trollshaws are referred to in the narrative as "the Trolls' wood".[5][6] According to the Index of The Lord of the Rings the "Trolls' wood" is equivalent to the "Trollshaws".[7] Trollshaws means Trollwoods.

The woods geographically belonged to where the ancient realm of Rhudaur used to be,[8][9][10] and were perhaps named after it. The Sindarin name Rhudaur means "Troll shaw".[11]

Trollshaws is where Arwen encounters Aragorn and the Hobbits - right near Old Bilbo's stone Trolls. 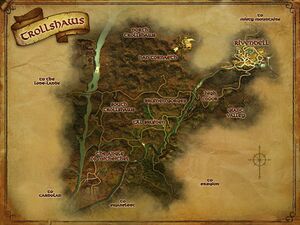 Map of the Trollshaws from The Lord of the Rings Online.

The Trollshaws is a region of the game located between the Lone-lands across the Last Bridge in the west, the Misty Mountains beyond Rivendell to the north-east, and Eregion to the south. The river Bruinen plays a prominent role there, with both the "Bruinen Gorges" and the hills of "Tâl Bruinen" being important areas. The "Angle of Mitheithel" between the Hoarwell and the Loudwater is also featured.

Rivendell is the only major settlement, but there are several camps and outposts kept by the Elves throughout the region. There are also many ruins inhabited by Trolls, hostile Hill-men, and other foes. The Ranger village "Tornhad" is another settlement, located in the Angle.

As in the book, the Company traverse the Trollshaws where they have a similar adventure with the Trolls.