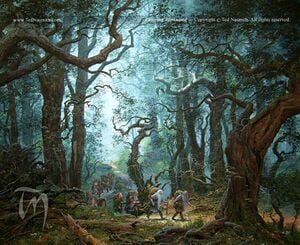 The Elf-path was a little-known pathway through Mirkwood. It led from a western entrance called the Forest Gate to the Elvenking's Halls and thence to the Long Marshes in the east.[1]

The western portion of the Elf-path was narrow and wound between the trunks of the forest's trees. Scattered shafts of sunlight soon ceased and the passage became as dark as a tunnel. In the late Third Age cobwebs entangled tree-branches on either side but none impeded the path. Roughly halfway through the forest the Elf-path was cut by the Enchanted River. This was 12 yards wide but a boat was permanently tied there to act as a ferry. Four days march beyond the enchanted stream the Elf-path entered an area where the dominant trees were slender beeches so the light was less dim. After a further two days march the Elf-path sloped downward into a valley of mighty oaks.

The Elf-path led to the Elvenking's Halls, presumably connecting to the bridge leading to the gates of the caves.[2]

However, at one time it extended further to the eastern edge of Mirkwood, but by the late Third Age it came to a doubtful and little-used end.

When Bilbo Baggins, Thorin, and the company of dwarves passed through the Forest Gate they found their surroundings to be still, dark and stuffy.

The dwarves may have failed in the quest when they came upon the Enchanted River. Thankfully, Bilbo's keen eyes spied the boat on the river's eastern eastern bank. With Bilbo's help, Fíli hooked the boat with a rope and the party could move on, but not before Bombur had fallen in and fallen into a sleep that lasted for many days.

Later the party heard distant singing and laughter. Bilbo climbed one of the trees to see if the end of the path could be spotted but, unaware that his tree was at the bottom of the valley, reported to the dwarves that no end was in sight.

The next day, with no food left, the party saw lights off in the forest and left the Elf-path to try to obtain something to eat. When they scrambled into the ring of feasting Wood-elves all the lights went out as if by magic. The party was lost, and they never returned to the Elf-path[3]. Instead, they were taken captives of Thranduil.

News of this had come to Gandalf, and he hurried to finish his other business and search for Thorin's company.[4]