Queer Lodgings is the 7th chapter of The Hobbit.

It is morning in the Eagle's Eyrie and Bilbo Baggins wakes up. Soon, fifteen Eagles safely carry Thorin and Company (including Bilbo and Gandalf) to the Carrock. Bilbo is frightened of the flight and the Eagle carrying him attempts to cheer him up.

Once the Eagles leave, the company descends to a small cave at the bottom of the Carrock and plan their next move, and they are saddened to hear that Gandalf will leave them in a few days; however he intended to find Somebody he knew when he visited that region again, some years ago. Then they bathe and dry their clothes under the midday Sun and cross the ford.

On their way Gandalf tells them that this important person in Beorn, a skin-changer, who is generally kind, but gets angry easily and he becomes appalling then. Gandalf explained that he is no furrier (as Bilbo misunderstood) and eats only cream and honey, not eating his animals.

It was the middle of the afternoon before they came to patches of flowers, and Bilbo sees huge bees, at the edge of his bee-pastures. After a while they come to a belt of tall ancient oaks, and then a high thorn-hedge. Knowing that Beorn would not like a band of travelers coming to his home, Gandalf suggests that a pair of Dwarves should follow him at an interval of five minutes (Bombur would come last) and goes with Bilbo to find the gate.

As they opened the gate and went down, some horses, trotted up across the grass and looked at them intently, then galloped to the buildings to tell Beorn of their arrival. They found Beorn in a courtyard, with a wooden house with two long wings, and a great oak-trunk in the middle. He held an axe and the horses were beside him.

Gandalf introduced himself and Bilbo, and mentioned his cousin Radagast whom Beorn might know. He said that after their encounter with the goblins, they are without luggage and way, and in need for help. He brought them inside and passing a large hall with a hearth in the middle, they sat in a veranda looking to the south. Gandalf started narrating his adventure, mentioning that he accompanied them on their way to visit the land of their fathers beyond Mirkwood. Starting with their arrival to the mountains, he mentioned key words like "with a friend or two", "troop", "dozen" and other, on which remark Beorn wondered who the others were. With his signal, Thorin appeared followed by Dori. Beorn recognized Thorin as the grandson of Thrór and expressed his distrust of Dwarves. During the course of the narration, Nori and Ori came, Balin and Dwalin, whom Beorn found comical and amusing, Fíli and Kíli, Óin and Glóin and finally Bifur and Bofur, followed by gasping Bombur, refusing to wait five minutes alone. Beorn was increasingly interested in the tale, especially in the point in which Gandalf killed the goblins.

By the sunset Gandalf concluded his tale and Beorn invited them to dinner. Horses, dogs and sheep with a ram came and tended the fire and served them. During the meal, Beorn and the Dwarves exchanged tales. Then, while Beorn was gone, they went to sleep in beds prepared for them. Bilbo slept uneasily because of the animal sounds outside, and fearing whether Beorn would come and kill them in enchanted form. 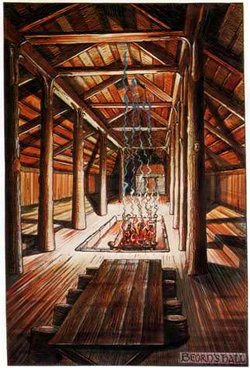 The next morning[3] Bilbo's sleep was interrupted by Bofur and saw that he was later for breakfast. Beorn and Gandalf were nowhere to be seen. As they were having supper (prepared by Beorn's animals), Gandalf finally came but he was too hungry to narrate. After having a rich meal and smoking his pipe and playing with colorful smoke rings, he started speaking.

He explained that he was picking out a large number of bear-tracks of various sizes, from almost every direction, and then all going to the west over the river. He followed them as far as the Carrock and lost some time to cross the river, but saw that they led where they had their encounter with the Wargs. With this Bilbo worries that Beorn will lead the goblins and wargs down there, and didn't take heed of Gandalf saying that he is not their ally.

The night he dreams of hundreds of black bears dancing slow heavy dances round and round in the moonlight in the courtyard till he wakes up in the middle of the night and hears the same sounds.

Next morning[4] they are all wakened and had breakfast with Beorn who was in a jolly mood. Yesterday he investigated the area over the river, in a bear form, and saw that their story was true. He caught a goblin and warg and interrogated them; they are still angry and hunting for the dwarves, and are preparing a raid in the area to take vengeance. He then killed them both; the goblin's head was stuck outside the gate and a warg-skin was nailed to a tree just beyond. Gandalf then tells him their whole story about Erebor and Smaug. Beorn then provides ponies and a horse, and food to last them for weeks (nuts, flour, dried fruits, pots of honey, twice-baked cakes) and also skins for carrying water, and bows and arrows.

Beorn warns them about Mirkwood they will soon traverse. He says that the Old Forest Road they were going for, is used by goblins and is impassable; they should enter and follow the Elf-path to the north until the Long Marshes. He also told them that they should not stray from the path, and should not touch a stream carrying enchanted drowsiness and forgetfulness. Also, there is nothing edible.

All that morning they are busy with preparations, and after the midday meal they mount the steeds. The sun has only just turned west, and in the evening when the dusk comes on and the peaks of the mountains glower against the sunset they make an uneasy guarded camp.

For the next two days, they see nothing save grass, flowers, birds, scattered trees, and occasionally small herds of red deer. The third evening they are so eager that they ride still into the night; as the light fades Bilbo notices a bear stalking them. The next day, they approach the forest and a silence begins to draw: birds sing less and there are no more deer or rabbits. By the afternoon they reach Mirkwood. It is when Gandalf reminds over their protests that he will leave, as he is late to his pressing business away south.

Tomorrow morning they fill their water-skins at a clear spring they found close to the forest-gate, and agreed to leave their ponies behind (as promised to Beorn) and Gandalf takes them with him to Beorn.