The Wargs were seen in Rhovanion and they were often allied with the Orcs of the Misty Mountains, and used as mounts. Wargs were clever and used a tongue, the "dreadful language of the Wargs".[3] 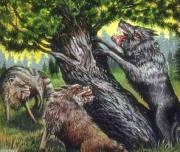