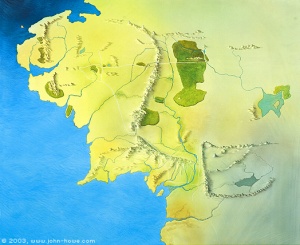 The Westlands of Middle-earth. Art by John Howe

Westlands was a large part of Middle-earth, perhaps referring to the entire north-western region of the continent.

Occasionally it may also be used more specifically as a name of Eriador.

The Westlands were the most well known and documented part of Middle-earth, the north-western part of the continent facing Belegaer. It consisted of huge regions of land, such as Beleriand/Lindon, Eriador, Rhovanion, Gondor, and Mordor. The most extreme regions of the Westlands (that perhaps did not belong to them) were alien lands such as Rhûn, Harad, and Khand. Beyond them, unknown lands lay to the East and South.

Of the Westlands, the western portion called Beleriand was drowned at the end of the First Age, and survivors relocated to Lindon and Eriador. Eriador, now the westernmost part of Middle-earth, was bordered by the Misty Mountains to the East which stretched down south to the White Mountains and the Bay of Belfalas.

Across the Misty Mountains from Eriador was another region of the Westlands, Rhovanion. It extended east to the Sea of Rhûn. Within Rhovanion, there were the great forest of Mirkwood, Fangorn Forest, and Lothlórien. To the south was the region of Mordor, encircled on three sides by mountains. To the far north of Rhovanion and Eriador alike was the icy Forodwaith.

The southern part of the Westlands was around the Bay of Belfalas, including the area of Gondor.

In the Elder Days, most of the Westlands were covered by an immense forest.[1]

The Westlands were populated by almost all known races of Middle-earth: Elves (Eldar) and Men who stayed behind on their way to the West, and who later escaped the destruction of Beleriand. Dwarves, Orcs and Ents also made their realms all over the Westlands.

During the Second Age, many Númenóreans came and established their settlements. It was then when the huge forests begun to shrink as trees were used to build their ships.[2] The Fangorn Forest and the Old Forest were the remnants of those days.

The Númenórean Realms in Exile, Arnor and Gondor, dominated the Westlands during the Second and Third Ages. Eventually, most of the Mannish peoples of the Westlands were brought together under the Reunited Kingdom. Their first King, Elessar, was titled "Lord of the Westlands" in the Fourth Age.[3]

In the Sindarin King's Letter, the term "Westlands" is translated as i Mbair Annui.[3]