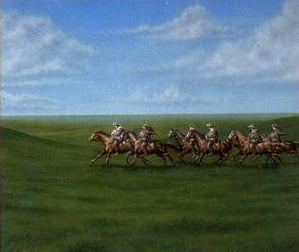 In a 1948 note on his General Map of Middle-earth, Tolkien drew an arrow from the River Running with the direction to the end of the map, and carries the note: "To Sea of Rûnaer. Hammond and Scull suggest that Rûnaer is likely an alternative name of Rhûn.[23]

Also in these early draft maps for The Lord of the Rings, Tolkien indicated that Neldoreth was the name of the forest bordering the Sea of Rhûn's north-eastern shore. This forest went unnamed in later maps.[24]

On the 25 March, the day when The One Ring was destroyed, an unknown calamity took place in Rhûn. In the weeks afterwards, streams of refugees begin pouring into the Iron Hills and the Dale-lands, despite those places having waged a war against the Easterlings not a full month before. The refugees are willing to take their chances against the prejudice and outward hostility directed against them from the men and dwarves of those lands, but none of them would speak in detail about what exactly had happened in Rhûn, other than it is absolutely impossible for them to go back. As of 2021, Rhûn itself has not appeared in the game.