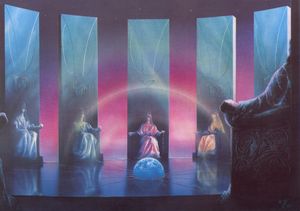 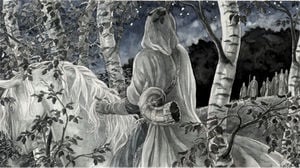 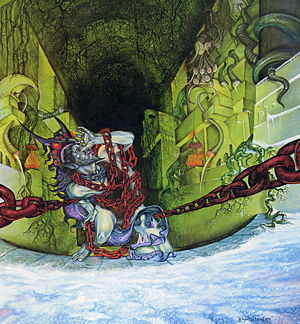 In a 1955 essay included in Morgoth's Ring, Tolkien wrote that the Valarian assault on Utumno was an act of desperation, one they feared would fail, and their main intent was to distract Melkor long enough for the Quendi to flee from him and escape his influence. Manwë descended into the depths of the fortress and met with Melkor, and both were surprised; Manwë, to see that his brother had "dispersed" so much of his power into the physical world, and Melkor, to see that, in his mind, he was now physically weaker than his brother and could no longer daunt him with a gaze. In this version, Melkor never fights Tulkas or the other Valar directly, and instead surrenders himself to Manwë willingly.

Though he briefly considers truly repenting, his mind turns to evil, and instead he plots to corrupt and ruin Valinor from within, asking that the Valar take him as their prisoner and that he be allowed to serve them in penance. Out of both pity for and fear of his brother, Manwë accepts, but the Valar do not fully trust Melkor; rather, he is taken to Valinor and placed under the watch of Mandos for "meditation" and contemplation on his actions. Unable to enact his plans without being noticed, and now separated from his armies and servants, whom he poured a great deal of his personal might into, Melkor regrets his decision and grows deeply hateful, wishing instead that he had assaulted Manwë and the Valar "in fiery rebellion" when he had the chance.[6]