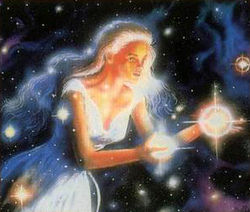 The stars are lights created and set by the Valie Varda, upon Ilmen (the upper airs) long before the Sun and Moon.[1]

The stars are associated with the Elves, who revere the stars and Varda. They give her the names Tintallë ("Kindler") or Elentári/Elbereth ("Star-queen").[2]

While the evil of Morgoth corrupted the whole of Arda the ancient stars contain the unsullied light of creation.[3]

Varda created the first stars in the earliest ages of the creation of Arda.[4] 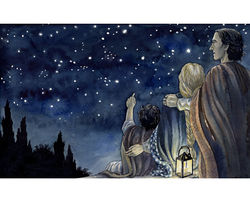 Ages later, prior to the awakening of the Elves Varda grouped together many of the ancient stars into constellations, including Menelmacar (Orion) and the Valacirca (the Sickle of the Valar, the Big Dipper), as signs in the heavens of Arda[5] "that the gods may read".[6] She also created new ones using collected light from the Silver Tree, Telperion. These included Carnil, Luinil, Nénar, Lumbar, Alcarinquë, and Elemmírë[note 1]

The Elves first awoke under the stars and according to tradition the stars were the first thing they saw, and the first word spoken by them was ele!, a primitive exclamation 'behold!' when they first saw. From this origin derived the ancient words el and elen for "Star".[7] Moreover, when Oromë first met the Elves, he too associated them with the stars and named them the Eldar, the People of the Stars.[8]

The Star of Eärendil is a unique case. Following his successful mission to persuade the Valar to intervene in the wars against Morgoth in the First Age, Eärendil and his ship, along with the last remaining Silmaril, were placed in the sky as a sign of hope to the faithful people of Middle-earth. After the war against Morgoth was concluded, a group of the Edain followed Eärendil's star to the newly created island that would become Númenor. Consequently, one of the names of that island was Elenna, or "Starwards". [note 2]

Emblems also featured stars. An eight-rayed star represented the House of Fëanor, and seven eight-rayed stars above a crown and anvil were the emblems of Durin. Both of these were depicted on the West-gate of Moria (the former because Celebrimbor, one of the makers of the doors, was a descendant of Fëanor). Seven stars appeared on the banner of Gondor. Certain jewels are also described as stars, notably the Star of Elendil that Aragorn wore into the Battle of Pelennor Fields. In the Song of Nimrodel, it is said that "A star was bound upon her brow," clearly describing some kind of jewel.

Other prominent references to stars include:

So important was this identification of the Elves with the stars to Tolkien that when he considered revising his creation myths so that the Sun and Moon existed from an earlier time (see Myths Transformed), he still insisted that the Elves must have awoken under the stars.