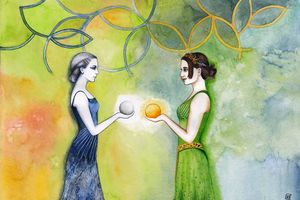 Of Sun and Moon by Šárka Škorpíková

Narsilion is the "Song of the Sun and Moon", telling of their creation: After the Two Trees of Valinor were poisoned, Manwë commanded Yavanna and Nienna to attempt to heal the Trees. Yavanna sang and Nienna wept, but to little avail until at last Telperion bore one silver flower and Laurelin a single golden fruit. These Yavanna took and gave to Aulë. Manwë hallowed them and Aulë and his people made vessels to hold them and preserve their radiance. Varda then took the vessels and gave them the power to traverse the lower regions of Ilmen.[1]

The Quenta Noldorinwa mentions "the song of the Sun and Moon".[2] Christopher Tolkien explains that if his father ever wrote such poem, it has dissapeared.[3]

In Quenya, Narsil means "Sun and Moon", derived from Anar ("sun") and Isil ("moon"), and the –ion suffix indicates the plural genitive. Thus in full Narsilion means "Of the Sun and the Moon".