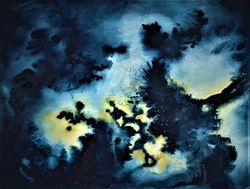 Ilmen (Q, pron. [ˈilmen]) was a part of the atmosphere that surrounded the world of Arda, the region of airs where the stars are.[1] Flesh cannot survive the airs of Ilmen unaided.[2]