"For not we but those who come after will make the legends of our time. The green earth, say you? That is a mighty matter of legend, though you tread it under the light of day!"
― Aragorn in The Two Towers, "The Riders of Rohan" 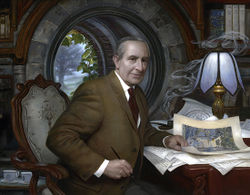 Tolkien himself used the term,[1] and also referred to his "mythology" in the same sense.[2][3][4] Expecting publication for The Lord of the Rings, and hoping that "The Silmarillion" would be published together, Tolkien envisioned his work (possibly including The Hobbit) as the "Saga of the Three Jewels and the Rings of Power"[5]