"It had begun with a leaf caught in the wind, and it became a tree; and the tree grew, sending out innumerable branches, and thrusting out the most fantastic roots."
― Elvish Linguistic Fellowship

Vinyar Tengwar, or VT for short, is a linguistic journal published by the Elvish Linguistic Fellowship, dedicated to the scholarly study of the invented languages of J.R.R. Tolkien.

The name Vinyar Tengwar is a Neo-Quenya rendering of "Newsletters" as a loose compound of the neologism vinyar "news" (a noun plural from vinya "new", compare vanya "fair" and the clan of the Vanyar) and the plural of the word tengwa "letter (of the alphabet)". Its accuracy is disputed, mostly due to the semantic difference between "letter of the alphabet" and "letter, mail, post".[1]

Vinyar Tengwar first appeared in 1988, at first edited by Jorge Quiñónez and later taken over by Carl F. Hostetter. It appeared in bimonthly intervals at first, but after July 1994, issues appeared more irregularly, roughly once a year. This coincided with the greater frequency of publication of texts written by Tolkien himself; the journal is now dedicated primarily to such texts. Several of these texts were mentioned in volumes of The History of Middle-earth, edited by Christopher Tolkien, but not published in that series owing to their specialist or recondite nature.

All back issues of the journal are now collected and published in volumes of ten issues, on a per-order basis. All 50 issues are compiled into 5 combined volumes. 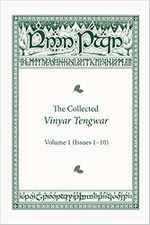