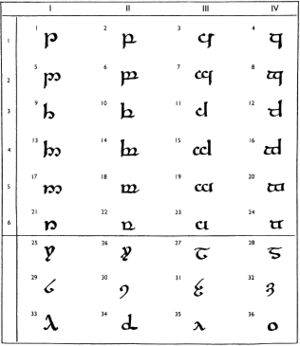 "The Tengwar" table by J.R.R. Tolkien in Appendix E: "The table shows, informal book-hand shape, all the letters that were commonly used in the West-lands in the Third Age".

The Tengwar (pron. [ˈteŋɡʷar], Quenya for “letters”, singular tengwa [ˈteŋɡʷa], Sindarin tîw[1]) was a writing system invented by Fëanor (and was therefore also called the Fëanorian alphabet[2] or script[3]). It was used for a variety of languages among the Free peoples and became perhaps the most prominent writing system of Arda, used by a variety of Races through the Ages.

Fëanor invented the Tengwar in Y.T. 1250 of the First Age of Arda, strongly influenced by the Sarati of Rúmil the Loremaster.[4][5] Fëanor both constructed the Tengwar as a general phonetic alphabet and devised special arrangements to fit the characteristics of all languages of Valinor.[6] Over the course of the First Age, three different modes of Tengwar emerged: Quenya, Beleriand, and Sindarin. Sindarin is written in one of two modes, the mode of Beleriand, or the mode of Gondor (also known as Omatehtar Mode). 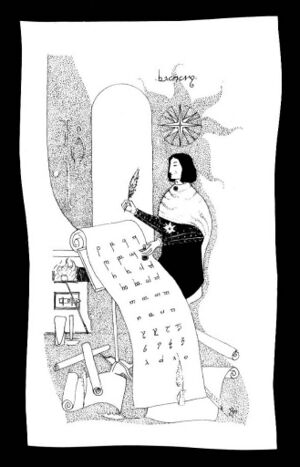 Unlike Rúmil, Fëanor considered vowels as independent sounds and not just “colours” of the consonants, so he devised the “full writing” (Quanta Sarmë).[5]

However, Fëanor also used a more 'conservative' system which seemed to have been proved far more popular; he also held Rúmil's idea of syllabic analysis of the words by the Sarati and made use of tehtar instead of the full letters.[5].

The classical Quenya mode of the Tengwar may have originated from Fëanor's own arrangement. There is no direct evidence for this hypothesis, but the use of the Quenya names for the individual letters hints to a primate of the Quenya mode. Another hint to a very old age of the classical Quenya mode is that it uses the Calmatéma as a k-series, like the mode of Beleriand which we can assume to have originated in the First Age.

When the Noldor rebelled and came to Middle-earth, they adapted their writing for the new languages they learned. Quanta Sarmë was used for languages where the tehtar were not useful[5] which could have been the origin for the Mode of Beleriand.

It is also possible that the Tengwar influenced the evolution of the Cirth of Daeron in Beleriand, mainly in their shape and arrangement.

We know from the inscription on the West-gate of Moria that a Tengwar mode called the Mode of Beleriand was used in Eregion. This name allows for the assumption that the same mode was used already in the First Age.

At the end of the Third Age, the Elves of Rivendell probably still used that mode, since a transcription of the Rivendell aerlinn A Elbereth Gilthoniel features it.[7] Frodo, however, even though literate in Sindarin, was apparently unable to read this mode.

By the end of the Third Age, there was a general use that could be used for a variety of languages including Quenya, Sindarin and the Common Speech.[8] This use could have evolved during the Second Age in Eregion or even in Númenor.

The Ring-inscription on the One Ring.

The same mode appears on the Ring-inscription[9] that the Númenorean Isildur observed it to be "fashioned in an elven-script of Eregion".[10]

It is not certain whether the whole mode itself was from Eregion or simply just the script was of an Elvish fashion. Some Adûnaic words use this mode.[11].

Another mode that was based on the "general use" but used full letters for the representation of vowels was used in the Northern part of the Westron-speaking regions, perhaps by influence of the Elves of Rivendell. This might explain why Frodo was unable to read either the Mode of Beleriand or the Ring Inscription.

The most notable characteristic of the Tengwar script is that the shapes of the letters correspond to the features of the sounds they represent.

The shape of the Tengwar uniformly consisted of two elements, the telco (stem) to which is attached a lúva (bow). It is noticeable that some of the letters of the Sarati resembled the telco/lúva shape seen on the Tengwar. Therefore it is possible that those particular letters influenced stylistically the Tengwar.

The telco could be normal, raised, shortened or heightened. The lúva would be single or doubled, and these could be open or closed.

All the above combinations can create 32 to 40 different shapes of letters. These shapes mirrored phonological significances: the basic form of a tengwa was used for the patakar, the voiceless stops; telcor determined how the sound was articulated, and the lúvar where in the mouth it was made:

The table below gives the theoretical[12] values of the Tengwar based consistently on the abovementioned rules. Note that no language possessed all these sounds and the following does not represent an actual table of values of a particular language. In actuality, the languages used modifications or variations of them.

By the end of the Third Age, the Tengwar were somehow standardized. Their Quenya names became standard for all modes, and less used ones were not included (although still used), such as those of the extended stems and the Tyelpetéma. The table displayed 36 letters: the 24 standard Tengwar, plus 12 of the additional Tengwar.

As mentioned, the Tengwar had a generic mode that covered a wide range of phonemes. This mode perhaps originated in Eregion and exemplified in the verse of the One Ring and other Westron Tengwar texts. It could be used for both Quenya and Sindarin.

The following table gives both the formal Quenya and Numenian[13] names of the Tengwar. When two values are given (separated with a / slash), the first refers to the Elvish variation and the second to the Mannish or Westron variation.

Note that the dashes indicate when the letter is used initially or finally and/or as a diphthong element.

The following is a full mode variety, related mainly to the north, and uses Tengwar (and carriers) as vowels. It was probably created in Arnor, influenced from the Mode of Beleriand used in Rivendell. Even the dwarf Ori wrote in this hand in the Book of Mazarbul[14].

Just as with any alphabetic writing system, every specific language written in Tengwar requires a specific orthography, depending on the phonology of that language. These Tengwar orthographies are usually called modes. All of them use as a basis the "theoretical values" table above, corresponding the letters to the phonemes of each language's phonology, and even drop out the characters that would be useless.

All the modes can be divided into two large categories:

The Sarati, a script developed by Tolkien in the late 1910s that is described in Parma Eldalamberon 13, anticipates many features of the Tengwar, especially the vowel representation by diacritics (which is found in many Tengwar varieties), different Tengwar shapes and a few correspondances between sound features and letter shape features (though inconsistent).

Even closer to the Tengwar is the Valmaric script, described in Parma Eldalamberon 14, which Tolkien used from about 1922 to 1925. It features many Tengwar shapes and the inherent vowel [a] found in some Tengwar varieties. The tables in the samples V12 and V13 show an arrangement that is very similar to the one of the primary Tengwar in the classical Quenya "mode".

The Tengwar were probably developed in the late 1920s or in the early 1930s. The Lonely Mountain Jar Inscription, the first published Tengwar sample, dates to 1937 (The Hobbit, most editions). The full explanation of the Tengwar was published in Appendix E of The Lord of the Rings in 1955.

Tengwar is a featural alphabet, meaning there is correspondence between letter shape features and place and manner of articulation. Perhaps the oldest and most famous featural system is the Korean Hangul alphabet.

Jim Allan (An Introduction to Elvish, ISBN 0-905220-10-2) compared the Tengwar with the Universal Alphabet of Francis Lodwick of 1686, both on grounds of the feature factor, but also the actual letter shapes, and the use of vowels as diacritics.

It is not known whether Tolkien was aware of these previous scripts. However, considering the sarati and the valmaric script that he already invented in his youth, it is conceivable that Tolkien developed the idea of featural notation by himself. However, in the Lord of the Rings, Tolkien described it as not an alphabet, but a "haphazard series of letters," as they each had its own value.[15]

It is likewise not known whether the shapes of several Tengwar were inspired by the insular minuscule script (used to write Anglo-saxon) or the gothic textura and cursive scripts (used to write Middle English), with which Tolkien was familiar through reading medieval manuscripts in these languages in his professional capacity as a linguist.

As the peoples of Middle-earth used various modes of Tengwar, and as Tolkien wrote English, Old English and Norse in Tengwar, fans have created Tengwar modes for real languages. There are modes to write French, Swedish, Latin, Italian or Spanish.

The contemporary de facto standard in the Tengwar user community maps the Tengwar characters onto the regular English character encoding following the example of the Tengwar typefaces by Dan Smith. A drawback of the font solution is that, if no corresponding Tengwar font is installed, an awful string of nonsense characters appears.

Since there is not enough place for all the signs, certain signs are included in a "Tengwar A" font which also maps its characters on ISO 8859-1, overlapping with the first font.

For each Tengwar diacritic there are four different codepoints that are used depending on the width of the character which bears it.

The following sample shows the first article of the Universal Declaration of Human Rights written in English according to the traditional English orthography. If no Tengwar font is installed, it will look nonsense since the corresponding ISO 8859-1 characters (Roman letters, numbers and signs) will appear instead.

A proposal has been made by Michael Everson to include the Tengwar in the Unicode standard. The codepoints are subject to change; the range U+016080 to U+0160FF in the Supplementary Multilingual Plane is tentatively allocated for Tengwar according to the current Unicode roadmap.

Tengwar are currently included in the unofficial ConScript Unicode Registry, which assigns codepoints in the Private Use Area. Tengwar are mapped to the range U+E000 to U+E07F. The following Unicode sample (which repeats the one above) is meaningful when viewed under a typeface supporting Tengwar glyphs in the area defined in the ConScript Tengwar proposal. Some typefaces that support this proposal are Everson Mono, Tengwar Telcontar, Constructium, Tengwar Formal Unicode, and FreeMonoTengwar (James Kass's Code2000 and Code2001 use an older, incompatible version of the proposal).

Random (meaningless) Tengwar appears stylistically in a prop of an ancient tome in the Within Temptation music video for "Stand My Ground". Tengwar also appears in the computer game Atlantis: The Lost Tales and the Alone in the Dark comic book.

Several linguists, such as Eric S. Raymond, promote the usage of Tengwar for the constructed language Lojban as it is culturally neutral and contains some main Lojban morphology rules, making Lojban easier to learn when it is written with Tengwar.[16] (Another suggested mode can be seen there).

More of Tengwar software on Tengwar Feanora web-site (in Polish).