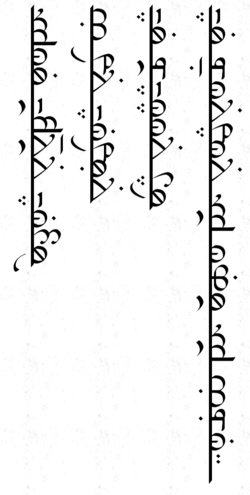 The Sarati, or The Alphabet of Rúmil, was invented by Rúmil of Tirion in Valinor. When Fëanor created the later Tengwar script, more ubiquitous both in Middle-earth and in real life, he modeled it after the Sarati. Unlike the Tengwar and Tolkien's other Elvish alphabet, the Cirth, the Sarati is written from top to bottom, then left to right. Sarati is unusual in that it is legible if written by either hand moving in either direction, and can be mirrored.

As in the later Tengwar, each full character represents a consonant, while vowels are represented with diacritics called tehtar. In the Sarati, vowel signs are written to the left or right of the consonants. According to Tolkien, consonants were considered more salient than vowels, and vowels were considered merely modifiers. When writing Quenya, the sign for "a" is usually omitted, as it is the most common vowel in Quenya. This would technically make the Sarati an abugida with an inherent vowel of "a".

Tolkien used the Sarati in one of his diaries but because he had continued to alter the alphabet with time he found it difficult to read earlier diary entries .[1][2]