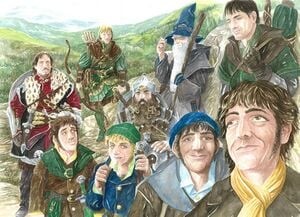 The Fellowship of the Ring by Abe Papakhian

"Farewell, and may the blessing of Elves and Men and all Free Folk go with you."
― Elrond in The Fellowship of the Ring, "The Ring Goes South"

The Free Peoples of the World[1] were those people who were not under Sauron's domination.

By the later Third Age Sauron had Orcs, Trolls and other creatures under his control, and other peoples like the Men of Darkness enslaved or allied with him. As such, the Free Peoples were the Elves, High and Middle Men, Hobbits, Dwarves, and any folk who opposed him.

In the Council of Elrond, Boromir made a mention of the "Free Lords of the Free", possibly referring to the rulers of the Free Peoples, such as Elrond or Denethor II,[2] while suggesting that they should use the One Ring against Sauron.[3]

The members of the Fellowship of the Ring were specifically chosen so that at least one representative of all the free peoples would be there: one for the Elves, one for the Dwarves and two for Men.[1] As they had appeared relatively late in the knowledge of most, Hobbits were generally not reckoned among them until the War of the Ring.[4]

In the prologue, the term "Free Peoples of Middle-earth" is used to describe those that formed the Last Alliance of Elves and Men.[5]

"Free Peoples" is one of the playable factions, the other being "Minions of Sauron". Its troops include Men of Gondor and Rohan, Dwarves, Elves, Huorns and Beornings.

The term "Free Peoples" is generally used to identify the "good" faction in the MonsterPlay sessions. It is often abbreviated as "Freeps".[6]